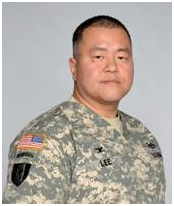 Lee began working with the IWRF in 2004, as a member of its Anti-Doping Committee.

He consulted on medical issues and policies, and was most recently part of the IWRF Medical Advisory Group which developed wheelchair rugby's return to play guidelines amid the COVID-19 pandemic.

In 1986, Lee began a distinguished career with the United States Army which started as a combat medic.

He was severely injured by a suicide car bomber in Iraq in 2014, suffering a traumatic brain injury and severe shrapnel wounds to his legs and arms.

After recovering he has continued his passion of helping fellow veterans recover from traumatic injuries and flourish in their lives.

Lee is currently associate professor of physical medicine and rehabilitation at the Clement J. Zablocki Veterans Administration Medical Center in Milwaukee, where he has worked as chief of the spinal cord injury medicine division since 2003.

He served as team physician for the Milwaukee Iron wheelchair rugby side between 2000 and 2008.

Since 2012 he has been the national medical director for the US National Veterans Wheelchair Games, while he is an athlete in the disabled category for the Milwaukee Eagles Wheelchair Lacrosse Team, who he also manages.

"I am honoured to be part of this great organisation and be among the best athletes and people in the world," said Lee.

"I really like the IWRF and the people that I have been working with."

The IWRF is planning to unveil a new section of its website next month, which will be dedicated to athlete welfare.

Lee has been instrumental in completing the project.

"I'm pleased that Doctor Ken Lee has accepted the role of chief medical officer, his knowledge and experience, particularly in relation to sports for people with disabilities will contribute hugely to the IWRF," said IWRF President Richard Allcroft.

"As a Paralympic Federation our resources, like many, are limited.

"Our role and aim is to provide as many useful services to our members, athletes and any individual who wants to be involved in the rugby family.

"We are promoting this as service-based leadership."