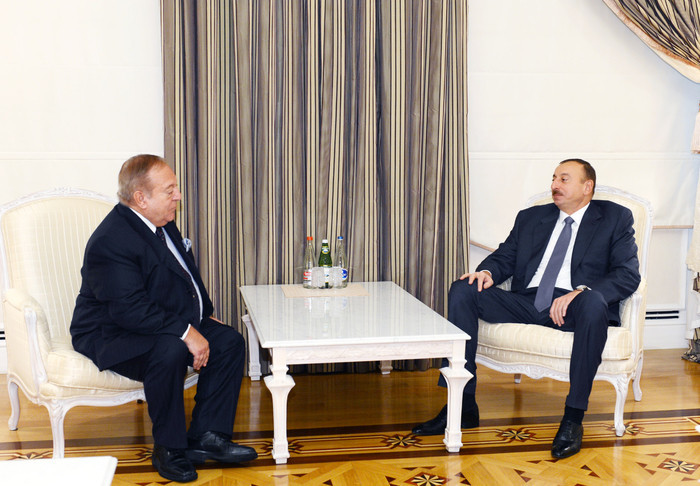 The McLaren report on weightlifting corruption states that the President of Azerbaijan, Ilham Aliyev, personally wrote to Tamás Aján to thank him for delaying the suspension of certain athletes who had tested positive for steroids.

McLaren revealed that dozens of doping cases had been covered up, mostly featuring athletes from Azerbaijan and Turkey, and that Aján persistently broke the rules to gather confidential information about doping.

Aján, who resigned as President of the IWF in April and who was castigated by the McLaren report yesterday for overseeing decades of corruption, said: "The claims against me are unfounded."

While the report, published yesterday, does not name President Aliyev it does mention the President of Azerbaijan’s National Olympic Committee.

Aliyev has held that role since 1997.

"In the forensic examination of the IWF’s servers, the [McLaren team] discovered a previously deleted letter addressed to Dr Aján from the Azerbaijan National Olympic Committee’s President dated 2016," states the report.

The letter thanked Aján for delaying the suspensions of certain Azeri weightlifters who had tested positive, who were thus able to take part in a prestigious competition in Baku, the Azerbaijan capital, when they should have been banned.

He won a bronze medal at London 2012, subsequently forfeited when he was one of the 60 weightlifters to have been caught for doping when the International Olympic Committee (IOC) retested samples in 2016.

Hristov tested positive twice in quick succession in April and June 2013 but was allowed to continue competing, including at the IWF World Championships in October - three months after the IWF knew he had tested positive.

Hristov, who is currently serving an eight-year suspension, won a gold medal for Azerbaijan at the IWF Baku Grand Prix in December 2013 and was not notified of his positive test until April 2014, a year after it happened.

When his two-year suspension began it was backdated to the time of the original test a year earlier.

Although Hristov was disqualified from the competitions in which he should never have competed, he continued competing and effectively served only a year’s suspension.

A letter sent to Hristov by the IWF was dated November 18 2013 ,but investigators found by studying the document’s metadata that it was in fact created in January 2014.

A total of 18 Azerbaijan weightlifters were positive for steroids in 2013, according to the IWF website.

According to the letter sent to Aján from President Aliyev, it appeared that notification of doping positives by these 18 were deliberately delayed until after the Baku competition.

"This intentional delay allowed these 18 athletes to compete in various championships, distorting the competition results and denying other athletes the opportunities to legitimately compete and win medals," said the report.

The details have been forwarded to the World Anti-Doping Agency (WADA) for investigation.

Asked if it would investigate Aliyev's letter, the IOC stated: "The IOC will liaise with the IWF for clarification on all the open questions arising from the report and will follow up accordingly."

Aján's "meddling" in anti-doping procedures, against the rules of the body he led, is highlighted by the McLaren team, which found that 21 Turkish athletes escaped suspension for doping and identified "41 hidden cases and 10 possible other cases" where doping positives had not been followed up.

The McLaren team found 45 outstanding cases between 2009 and 2014, "where it appeared that no decision had been rendered and related results not uploaded", many of them Turkish.

Further analysis led to "closed" results in many cases but, said the report, "the Turkish, and some other cases, remained outstanding and triggered a more in-depth review."

Between 2010 and 2012, 26 Turkish weightlifters tested positive on five testing missions, yet there was no further action detailed in the IWF’s records and not one of them was suspended.

Of two athletes who tested positive in 2010 - believed to be Nurcan Taylan and Sibel Özkan - one won gold medals at World and European Championships, and the other won a World Championship silver, while both should have been suspended.

Taylan and Özkan also came up positive in the retesting of samples from the Beijing 2008 Olympic Games.

"He is the only person who receives cash fines, with some rare exceptions when other members of staff acted on his behalf.

"It has been established during this investigation that Dr Aján is the sole person making all cash deposits into the IWF’s Bank accounts."

Aján had, "in his capacity as either General Secretary or President, presided over the many decades of doping scandals that have affected the sport," said the report.

The period of 2009 to 2019 was "the worst decade of doping the sport of weightlifting has ever experienced".

There were 58 weightlifting positive tests on the retesting of samples from the Beijing and London Olympic Games in that period; the updated total now is 60.

There were also 24 doping violations - by athletes whose samples inexplicably tested clean beforehand - at the 2015 IWF World Championships in Houston.

"Over the decade there have been at least 615 confirmed Anti-Doping Rule Violations (ADRVs).

"Throughout this time Dr Aján was a proud member of the WADA Foundation Board, boasting about his clean sport while presiding over one of the dirtiest decades in the sport’s history."

Aján was general secretary of the IWF during the 1980s and 1990s, which the report described as "the wild west" of doping in many sports.

Weightlifting was threatened with expulsion from the Olympic Games in 1988 after a string of positives led to three teams withdrawing.

"The IOC’s early warning triggered a move by the IWF to restructure its weight classes in 1992, eliminating questionable World and Olympic records.

"The change took effect at the beginning of 1993.

"A further and similar restructuring occurred in 1997.

"Doping was so pervasive in the 1990s that had the IWF not acted, the records established during that period would likely remain unbroken up to the present."

Aján was a Foundation Board member of WADA in 1999, and has had considerable influence over the IWF’s anti-doping procedures.

Until the WADA Code was introduced in 2004, the report said, the IWF’s anti-doping programme was coordinated by a single person despite weightlifting’s doping problems.

The investigators were concerned at Aján's ability, in his role as IWF President, to gain access to the Anti-Doping Commission’s (ADC) confidential information, "which could be used in some capacity to give advance notice of out-of-competition testing and manipulate the results management of cases".

"The President would gain access to the confidential and independent functioning of the ADC, in order to frustrate its operations" - in breach of IWF by-laws on confidentiality.

Through the course of its investigations, the McLaren team also found many allegations were unsubstantiated, including those against the Hungarian National Anti-Doping Organisation (HUNADO).

The German TV documentary Lord of the Lifters made allegations against HUNADO that were, said McLaren, unfounded.

"HUNADO is not the cause of doping sample manipulation or hidden results," he said.

"It has operated in compliance with WADA standards.

"The investigation found that the procedures followed by Doping Control Officer Barbara Kallo were correct and in accordance with the WADA Code.

"The source of antidoping issues that have plagued the IWF and sport of weightlifting lie elsewhere."

As for the suspicious tests before the 2015 IWF World Championships in Houston, experienced anti-doping scientists were unable to come up with an explanation.

Of 24 athletes who tested positive at the World Championships, all 24 had provided samples that came up clean in out-of-competition tests a short while before.

A WADA spokesperson said: "WADA remains in consultation with the McLaren investigators, who have indicated their willingness to provide the Agency with the relevant evidence they have gathered.

"Once WADA has had the opportunity to review that evidence as well as the report in full, the Agency will consider the next appropriate steps to take."

Tygart said the McLaren revelations were "yet another devastating blow to the credibility of sport governance and the global anti-doping system.

"This report revealed International Weightlifting President, IOC and WADA Foundation Board member, Tamás Aján, covered up 40 doping cases alongside many other examples of unethical and outrageous behaviour... all of which has ultimately robbed athletes.

"It’s time for real reform at WADA - reform that will once and for all remove the foxes from guarding the henhouse.

"These sport officials are the only ones winning here and it comes at the expense of clean athletes and the integrity of sport."

Tygart said it was time "to involve athletes in the creation and leadership of an independent oversight committee to take over all of international weightlifting’s operations and management."