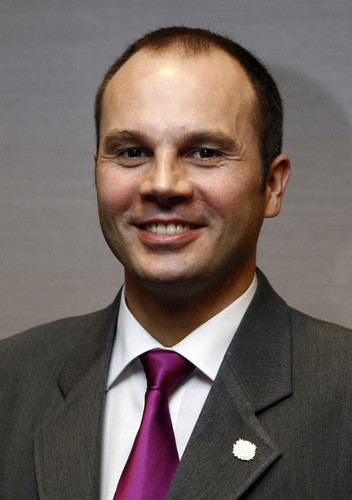 There is also likely to be another independent investigation, looking into McLaren’s evidence that some members of the Executive Board earned their places through bribes.

McLaren did not name any Board members or say how many were involved, but the IWF’s Oversight and Integrity Commission (OIC) will be given the information.

Any members implicated in this way "will not be able to take part in any proceedings in which their elections are discussed," said Papandrea.

"My intent, and I’ll discuss this with the OIC, would be to create an external body as we did with the {McLaren} investigation, independent of the IWF, to investigate any claims of any members of the Executive Board being engaged in any malfeasance related to the electoral process."

There were rumours before McLaren’s report was made public in Toronto today that Adamfi’s position had been terminated.

Adamfi is son-in-law of the former IWF President Tamás Aján, who was castigated by McLaren for overseeing decades of corruption featuring financial malpractice, anti-doping cover-ups and vote-rigging.

Adamfi had done much of the work that led to weightlifting regaining its guaranteed place on the Olympic Games schedule after the International Olympic Committee (IOC) threatened to remove it in 2017.

Adamfi, a multilingual, highly qualified administrator, was the mastermind of the new Olympic qualifying system that led to rigorous dope-testing of athletes and drew praise from the IOC.

There are 18 mentions of him in the 122-page document reporting on the McLaren team’s findings, including one stating that evidence from his hard drive implicated him in a bribes-for-votes operation at the 2017 IWF elections.

Aján’s unreceipted cash flows are one of the features of the McLaren report, which states that more than $10 million (£7.93 million/€8.82 million) is unaccounted for over a period of years.

When asked about Adamfi’s role at an IWF press conference Papandrea said: "I cannot make any comment as regards his status with the IWF, which is under legal review.

"We recently created a reorganisation chart and we’re looking to ensure that everyone is hired external to the organisation, and that is one of the questions concerning Attila.

"It’s under legal review and that’s the extent of my comment."

In 2014 Aján  created the new position of Director General and, said the McLaren report, "the anointed Executive Board allowed the appointment despite the position not existing in the Constitution and the obvious issues of nepotism."

The report also stated that "interviews with various members of the Executive Board and Secretariat reveal that Mr Adamfi is the effective day-to-day ‘active President’."

Aján was given an ambassador role in April after resigning as President.

When asked whether he would keep it Papandrea said: "It would be in the interests of the sport if we could take some corrective measures regarding this."

Papandrea also said that any evidence of criminal activity, or of breaking the rules of the World Anti-Doping Agency (WADA) or the International Testing Agency (ITA) would be forwarded to the appropriate authorities.

"Any information we have regarding potential crimes will be forwarded, as will info for the ITA and WADA.

"The Board asked for this investigation because we wanted to know what had gone wrong – only now that we know can we take the steps to reform the organisation so we won’t have to ever be involved in situation like this again."

Papandrea "strongly recommended" that the next IWF election should take place in Lausanne, to where the Secretariat’s offices are being moved from Budapest.

"We want to ensure the elections are done in a fair and open way, with the monitoring we require until the point when we can reacquire the trust of the IOC and the Member Federations," she said.

Despite all the evidence of corruption from McLaren’s team, Papandrea said she was certain weightlifting would retain its Olympic status.

She pointed out that many steps had already been taken in reforming the IWF and the way it operates.

"We can become an exemplary Olympic sport, and that is my goal," said Papandrea, the first woman to lead the IWF in its 105-year history.

"I would like weightlifting to become the leading sport in the Olympic Movement in driving forward modernisation of governance, reform, transparency, and accountability on all fronts.