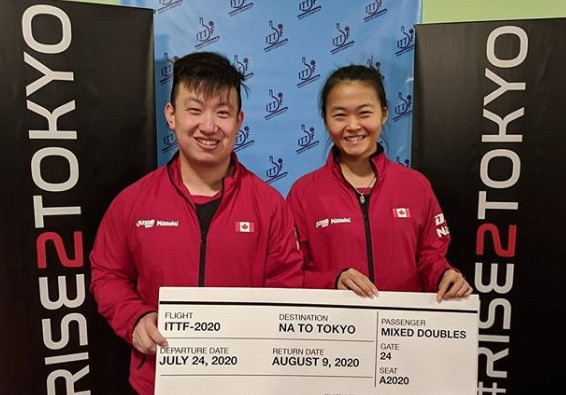 Mo Zhang and Eugene Wang won the mixed doubles Olympic qualification match between Canada and the United States at the My Table Tennis Club in Kitchener in Ontario.

The pair had already ensured their qualification following wins in the singles competition on Saturday and have now booked their places to represent Canada in the mixed doubles competition, following their win over Liu Juan and Zhou Xin of the United States.

Meanwhile, Wang is also set to compete at his third Olympics, with the 34-year-old having also represented Canada at the 2015 and 2019 editions of the Pan American Games.

Jeremy Hazin and Hui Hung (also known as May Tong) have been selected to represent Canada in the final World Olympic Qualification to be held in Doha in Qatar, from May 28 to 31, giving both players one final chance to realise their dream and qualify for the Olympic Games in Tokyo.

"Congratulations to Mo and Eugene, and full support from the Canadian table tennis community to May Tong and Jeremy," said Adham Sharara, President of Table Tennis Canada.

"To all the other Canadian players who tried their best but did not earn a spot into the Olympic Games, I encourage you to keep trying to qualify for other major events and eventually for the next Olympic Games."