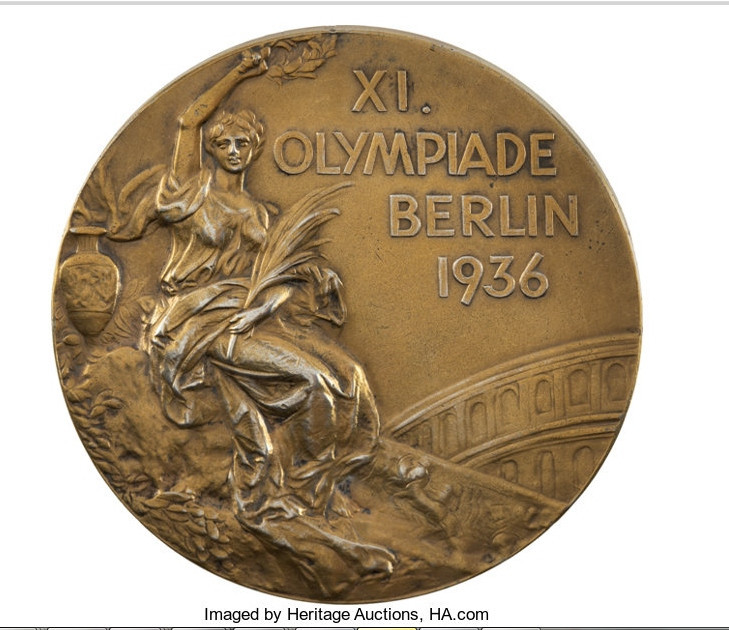 An Olympic gold medal won by the United States' basketball captain Bill Wheatley at Berlin in 1936 has been put up for auction.

The tournament at the notorious "Nazi Olympics" was the first time that basketball was played in the Games.

Tennis courts were used for the competition.

This caused problems when the weather was adverse, especially during the final game, which the US won by beating neighbours Canada 19-8.

Wheatley wrote about the experience for his hometown newspaper, the Gypsum Advocate in Kansas, in a front-page article on September 17 in 1936.

"Someone would pass to you and sand would fly in your eyes and the ball would slip out of your hands," he wrote.

"The court was so slick and muddy that we could hardly stand up."

The medals were awarded by James Naismith, the inventor of basketball.

As team captain, Wheatley received his gold first - making him the first basketball player in Olympic history to be awarded a medal.

Wheatley was offered a professional contract to play for the New York Celtics in 1937 but turned down the opportunity, although he remained actively involved in amateur basketball for the rest of his life while working full-time as a carpenter.

The medal measures 55 millimeters in diameter and tips the scales at 72 grams.

Minor handling and storage wear is apparent, Heritage reports in the description of the medal on its website.

The medal was displayed for some time at the Naismith Basketball Hall of Fame, and has been put up for auction by Wheatley's son-in-law Bill Dennis.

He has provided a signed letter of provenance, as well as copies of photographs of Wheatley with the victorious team, most notably as Naismith presented the medal to Wheatley on the top step of the Olympic podium.

Nearly 50 years ago, Wheatley's house was targetted in a robbery with the thieves stealing a number of silver coins from a draw but ignoring the Olympic gold medal next to them.

Dennis claimed Wheatley, who died in 1992 at the age of 82, had told him, according to Associated Press, that “If you ever want to sell the medal, just do it.

"Somebody will appreciate it.

"I decided it was time for the medal to move on."