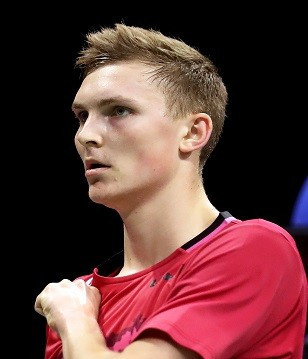 It was the same story in the men's doubles as the Danish pair of Kim Astrup and Anders Skaarup Rasmussen triumphed without dropping a set, prevailing 21-17, 21-19 in 43 minutes against the top seeds Lee Yang and Wang Chi-Lin of Chinese Taipei.

The final day of action at Pavelló de la Vall d'Hebron started with the mixed doubles final, which saw unseeded Korean pair Kim Sa Rang and Kim Ha Na come from a set down and spring a surprise to win 15-21, 21-11, 21-10 against the French sixth seeds Thom Gicquel and Delphine Delrue.

The women's doubles final was the longest contest of the day, and saw Bulgarian third seeds Gabriela Stoeva and her sister Stefanie, up against top seeds Greysia Polii and Apriyani Rahayu.

It was first blood to the Stoeva sisters as they took set one 21-18, but the Indonesian pair came fighting back winning a marathon second set 22-20.

Polii and Rahayu then went on to take the third set 21-17 to seal the title in a contest that lasted one hour and 36 minutes.

There was disappointment for the home crowd in the day's other final, the women's singles, as top seed and the host nation's only finals day representative Carolina Marin went down in three sets.

Spaniard Marin took the first set against her Thai opponent Pornpawee Chochuwong 21-11, but Chochuwong fought back to win the next two sets 21-16, 21-18 and clinch victory in one hour 17 minutes.

The next tournament on the BWF World Tour calendar is the German Open which runs from March 3 to 8.