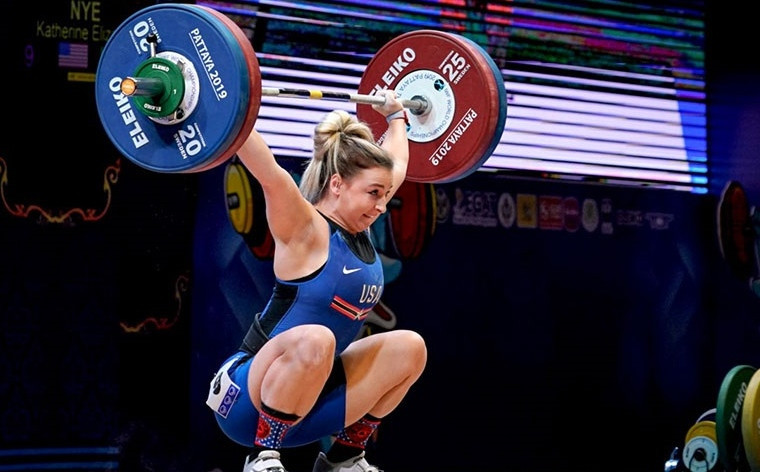 Katherine Nye has capped a remarkable run of weightlifting achievements by the United States by becoming the first American to be named world weightlifter of the year.

It was yet another reminder that the US is one of the most improved nations in the sport - and its achievements are not restricted to what happens on the platform.

While the US has taken huge strides during this Olympic quadrennial, it has arguably made more progress in the past four weeks, in terms of status, than at any other point in the Olympic cycle.

On January 22 the US provided the IWF with an Acting President when Ursula Papandrea was voted in during a 90-day stand-down by Tamás Aján, pending an investigation into allegations of corruption.

Papandrea is not only the first American at the head of the global governing body, she is also the first woman in the role.

A week later, at the Roma 2020 World Cup, Jourdain Delacruz broke the Pan American record in the women’s 49 kilograms with 195kg, the highest total in this or the old 48kg category by a non-Asian since 2010.

Moving on to this past few days Phil Andrews, chief executive of USA Weightlifting (USAW), has been appointed director general and treasurer of the Pan American Federation, and Nye has become the first athlete not just from the US, but from anywhere in the Americas, to win a World Weightlifter of the Year award.

You have voted! 💪You choose the Lifters of the year 2019! And the winners are... TALAKHADZE Lasha and NYE Katherine Elizabeth!
Congratulations to them, they're both fantastic athletes! 👊#IWF #weightlifting #athletes #sports pic.twitter.com/rUzyGlFo1V

Nye won with just over 9,000 votes ahead of Kuo Hsing-Chun of Taiwan, with Colombia’s Leidy Solis third and Deng Wei, the multiple world record holder from China, fourth.

With double world champion Solis one of its best achievers, Colombia has also given Pan American weightlifting a boost in recent years.

Colombia has won more Olympic medals in weightlifting than in any other sport, all seven of them coming since women's events first became part of the Olympic Games programme in 2000.

"We started from zero and now, in terms of results, we are the number one sport in Colombia," said the Colombian Weightlifting Federation President William Pena late last year.

Pena has also taken high office at the Pan American Federation, having been elected as secretary general.

In the men’s award Talakhadze was nearly 12,000 votes clear of runner-up Simon Martirosyan of Armenia, with China’s Lyu Xiaojun third.

Talakhadze, unbeaten since his 2015 IWF World Championships victory, set three world records last September and has not missed a single lift in qualifying for Tokyo 2020.

Nye had a career-best lift only last week.

She said, "I don’t know how I did this," on a social media post after a training lift of 150kg off blocks, an improvement of 12kg on her previous best in training and 13kg more than her personal record in competition.

One of her targets for the year is to make a total of 260kg, which would likely be enough for an Olympic medal in the 76kg class in which she aims to compete.

The popular Nye, 21 last month and who became the youngest ever American world champion last year, is due to receive her award at a gala evening in New York City on April 14.

She started in gymnastics as a young child, gave up aged 15, tried CrossFit and swiftly moved into weightlifting

"Weightlifting has definitely made me a better person, both physically and mentally," said Nye.

She is studying with a career in healthcare in mind, as well as training hard under coach Josh Galloway.

Asked how she would celebrate her weightlifter of the year award, Nye told insidethegames, "While I’m very excited to have received this phenomenal award, I’ll celebrate by training even harder to prove why I earned it.

"I’ll get to celebrate formally at the Golden Gala when I actually get the award physically."

Her favourite moment on the platform in 2019 was winning the senior World Championships in Thailand and setting a junior world record in the process, in the snatch.

Mattie Rogers was runner-up in that 71kg contest - the first time the US had a 1-2 in the World Championships.

"It was a truly unforgettable experience," said Nye.

"Outside the gym, my husband and I moved into our first home and got our puppy, Theo.

"We’ve both kept busy in school pursuing our respective careers.

"There’s been a lot going on to be thankful for.

"I definitely anticipate 2020 to be my best year yet.

"I’m on the cusp of being named to my first Olympic team, which will be the biggest honour of my life.

"Lifting for a medal at the Olympic Games is the ultimate goal that I’m spending every day training for."

I got a career and I’m very invested
Some people call it a scary obsession @jackharlow pic.twitter.com/OeQsyeNmlu

Andrews highlighted some of the landmark achievements by USAW and its athletes in the 2016-2020 Olympic quad, not least being the huge increase in payments to elite lifters.

“Approximately $4million has gone straight into athletes’ pockets, and we’re very proud of that,” said Andrews, who became chief executive of USAW four years ago this April.

Membership has increased to 27,000, investment in the sport is up 40% compared to the previous Olympic cycle, the number of sponsors and backers has quadrupled to 20, income is up from $3.8m to $7m - and the benefits are being seen at all age levels.

Nye was helped to her award by becoming the first American female to win an IWF Junior world title in 19 years, and was part of a 2019 senior women’s team that won the best USA medal haul at a senior World Championships in 30 years.

Peyton Brown became the first American weightlifter to win a medal at the Summer Youth Olympic Games in 2018, and there have been many world records by youths and juniors.

When it comes to Tokyo 2020 the US is all but certain to qualify a maximum team of eight, a feat that will be matched by only two or three other nations - China, Colombia and, possibly, North Korea.

There have been more gains in terms of governance, such as a new process to deal with ethical and judicial issues, and a mental health programme for athletes - and in fund-raising and promotion of the sport.

The US has hosted global championships from youth to seniors to masters level, as well as other international events.

"There have been so many firsts in this quad," said Andrews.