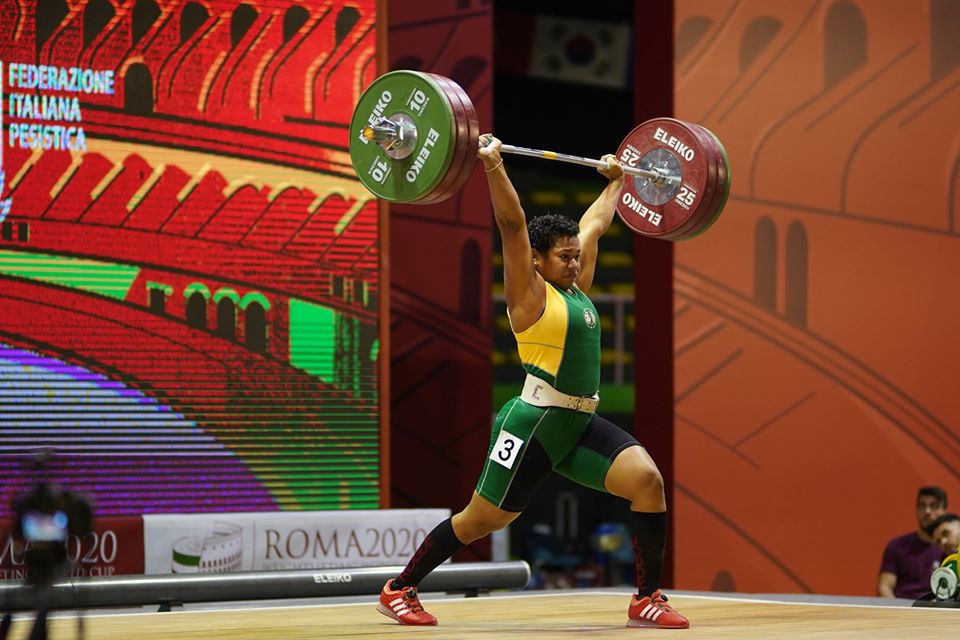 Eileen Cikamatana failed with a world record attempt at the Roma 2020 World Cup but comfortably earned her third straight victory for Australia, the nation she has competed for since last May.

In her first competition since leaving the junior ranks, 20-year-old Cikamatana - one of the most exciting young talents in weightlifting - did not start until her 81-kilogram rivals had finished, both in the snatch and clean and jerk.

She failed with one snatch attempt at 120kg, and with her second and third clean and jerks.

She finished on 255kg, with 115kg in the snatch and 140kg in clean and jerk - well clear of the American Jessie Bradley on 239kg, with Belgium’s Anna Vanbellinghen third on 227kg.

Although the World Cup is an Olympic qualifier, Cikamatana cannot compete at Tokyo 2020 as she switched nationality during the qualifying period.

She was involved in a dispute with the Fiji Weightlifting Federation that left her home nation without a team for a while.

After the win in Peru she said, "If I miss an Olympic Games there’s another one coming up, and another one - it’s not like it’s the end of the world."

While others focus on Tokyo 2020, her next big target is the 2022 Commonwealth Games in Birmingham.

Meredith Alwine continued a good run of results for the United States by winning the women’s 71kg by a wide margin with 237kg.

Her clean and jerk of 134kg was only 3kg short of the junior world record held by her team mate Kate Nye, who seems certain to qualify ahead of 21-year-old Alwine for Tokyo 2020.

A Canadian lifter recorded a personal best for the second day in succession when Kristel Ngarlem finished third in the women’s 76kg behind the former junior world champion Iryna Dekha of Ukraine.

Ngarlem totalled 233kg, 1kg behind Patricia Strenius of Sweden and 3km behind Dekha, who looks sure to compete at Tokyo 2020.

Maude Charron had a career-best total in the women’s 64kg last night, when Boady Santavy also did well in finishing second in the men’s 96kg.

Craig Walker, President of the Canadian Weightlifting Federation, has been impressed with results in Rome and is hopeful of four qualifiers for Tokyo 2020.

"As a team we are looking for consistent, incremental improvements leading up to the final qualification events in April," he said.

"While nothing is guaranteed, I remain confident that we can secure a couple more spots on the women’s side in Tokyo.”

One leading athlete who will surely not be going to Tokyo 2020 is the Vadzim Likharad of Belarus, who has tested positive for anabolic steroids.

Likharad, well placed at 73kg and top of Belarus’ all-weights qualifying list, is provisionally suspended while his B-sample is tested.