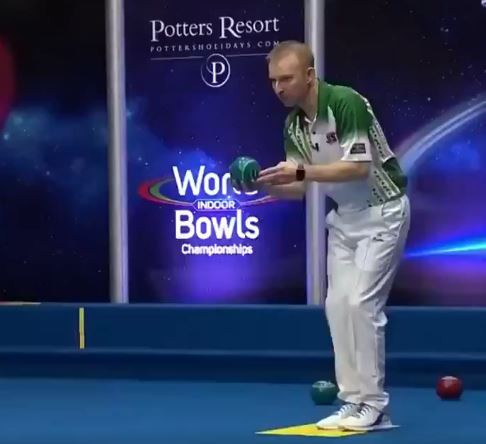 England’s Nick Brett put himself in line for a hat-trick of titles at the World Indoor Bowls Championships in Norfolk tonight as he reached the open singles final, where he will meet fellow countryman Robert Paxton tomorrow.

Sixth-seeded Brett, who has already picked up gold at the Potters Leisure Resort's International Arena this week in the mixed pairs and men's pairs, won his semi-final against the 15th seed from Wales, Jason Greenslade.

Brett won the men's pairs title in partnership with fellow England player Greg Harlow on Monday, and he and Wales's Marion Purcell claimed the mixed pairs gold the following day.

One of Brett's shots in Monday's men's pairs final, threaded through a gap of about six inches, has gone viral on social media.

Greenslade had beaten the 2018 champion, England’s Mark Dawes, to reach the last four.

But an 8-7, 8-5 scoreline was enough to put the 45-year-old Peterborough player through to meet an opponent who had beaten the defending champion, Scotland’s Stewart Anderson, in the quarter-finals.

Paxton, a 41-year-old Devonian, maintained his winning momentum in the day's first semi-final with an 8-5, 10-1 win over fellow Englishman Les Gillett.

Gillett, seeded fifth, had earned his semi-final place with a victory over Scotland's David Gourlay but he had no answer to the eighth seed.

A world indoor singles silver medallist in 2016 and 2018, Paxton now has another chance to claim gold.