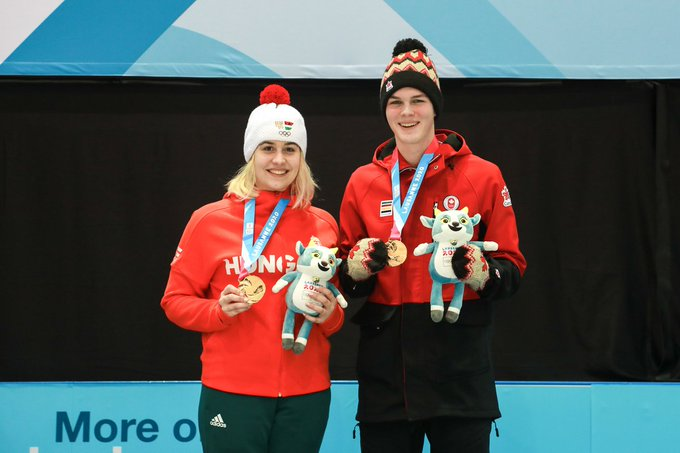 Hungary's Laura Nagy and Canada's Nathan Young were crowned Lausanne 2020 mixed doubles curling champions, after a strong start to the final provided the platform for an impressive victory at the Champéry Curling Arena.

Parings in the mixed National Olympic Committee (NOC) competition needed to win two matches on the final day of the Winter Youth Olympics to win gold, with competition resuming at the semi-final stage.

Nagy and Young booked their place in the final with a 6-2 victory over Japan's Mina Kobayashi and France's Leo Tuaz.

France’s Chana Beitone and Russia's Nikolai Lysakov would provide the opposition in the final, after the duo were 10-5 semi-final winners against China's Pei Junhang and Czech Republic's Vit Chabicovsky.

The destination of the gold medal quickly became apparent, with Nagy and Young taking charge in the opening ends of the contest.

The pairing began the match by scoring three points in the opening end.

Two points in the next two ends gave Nagy and Young a comfortable 7-0 lead, as it approached halfway.

A fightback briefly appeared possible for Beitone and Lysakov, with three consecutive scores helping them to reduce the deficit to 7-5.

Nagy and Young made sure of the victory by scoring a point in the seventh and eighth ends to seal a 9-5 victory.

The bronze-medal match saw Pei and Chabicovsky bounce back from their semi-final disappointment.

The Chinese and Czech pairing slowly pulled away from their rivals Kobayashi of Japan and Tuaz of France.

Pei and Chabicovsky secured a 7-3 to take bronze.