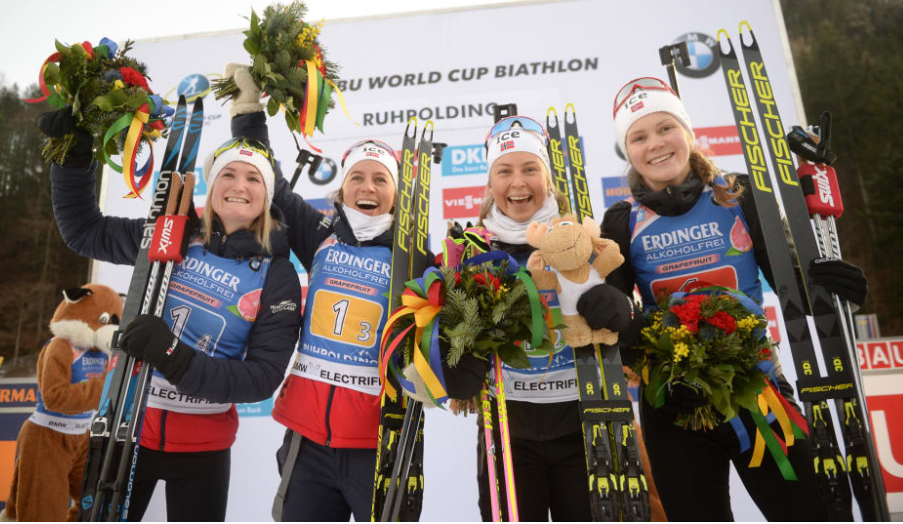 France finished second with eight spares, 10.7 seconds back, while Switzerland came third, 20.7 behind.

It was the first Norwegian victory in Ruhpolding since 2013.

"I skied behind a really great athlete in the first loop and did not try to catch her," Røiseland said.

"Then she used some extra in prone and she was right behind me, so the fight was tough."

The win backs up World Cup success for both the Norwegian men's and women's relay team last weekend in German town Oberhof.

Congratulations to the top 3 in the #RUH20 women relay. Norway took the win @NSSF_Biathlon. France were second @FedFranceSki and Switzerland third. Watch the race again on https://t.co/MSJYx30KUx pic.twitter.com/XF7AWmrmuW

The early stages suggested a different result, with Italy's Lisa Vittozzi leading the field to the first exchange after a single standing spare.

Vittozzi then tagged Michela Carrara nine seconds ahead of the United States and France.

However, the Italian lead disappeared before the prone stage, where Austria's Katharina Innerhofter cleaned to move into first, with France's Anais Bescond in hot pursuit - Norway were still adrift in eighth.

Eckhoff then made a signification charge with a 5-shot stage to move up to fourth, 27 seconds back.

But the rhythm of the reace changed, with Røiseland and France's Justine Braisaz  pulling away before the prone stage.

The Norwegian used a spare, cleaning first, while Braisaz used two to fall 11 seconds back.

Røiseland then clinched the victory with a six-shot clean stage.