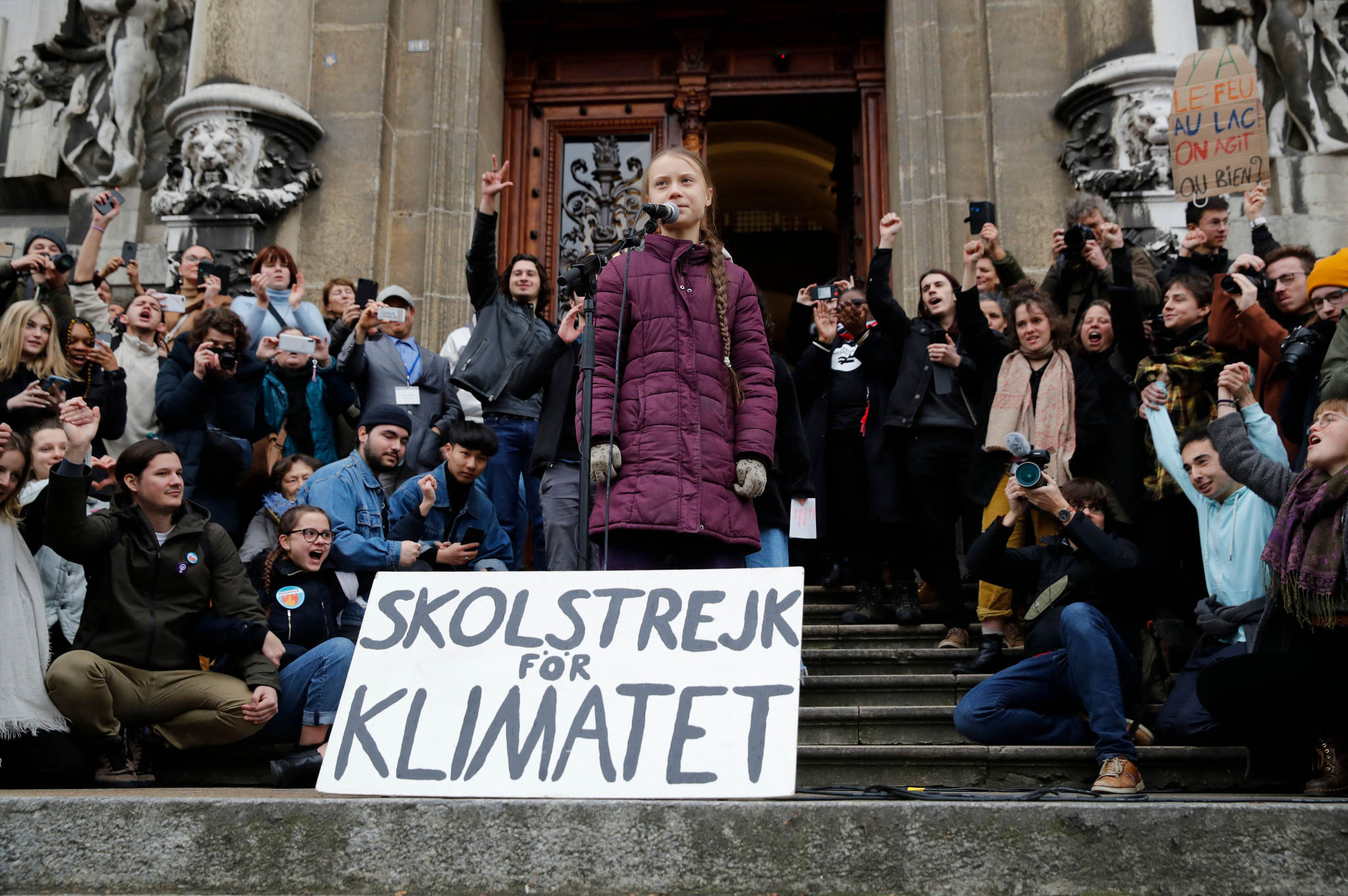 Climate activist Greta Thunberg issued a warning to world leaders that climate change demonstrations will not go away, as a march swept through Lausanne during the Winter Youth Olympic Games here.

Thunberg is widely credited with helping to launch a worldwide "Climate Strike Movement", which has seen children skip school to stage demonstrations encouraging politicians to act.

This event marked the first anniversary of strikes in Lausanne, with protestors singing "happy birthday" as the demonstration began at 10.30am.

It started at the central train station in the Olympic capital, before participants marched through the city.

Marchers briefly halted when passing the Lausanne Palace Hotel, before moving on to the centre of the Lausanne.

Boos were heard outside a branch of Credit Suisse, which campaigners have criticised for its fossil fuel investments.

Thunberg addressed the crowd, many of whom were carrying banners, at the conclusion of the demonstration.

The 17-year-old from Sweden warned politicians ahead of the World Economic Forum in nearby Davos next week that the protests would not stop until positive action was taken.

"I am so thankful that all of you showed up today with your beautiful faces, thank you," Thunberg told the crowd.

"We are now in a new year and have entered a new decade.

"So far, during this decade, we have seen no signs whatsoever that real climate action is coming - that has to change.

"We have now been striking for a very long time.

"For well over a year, young people from all across the globe have been school striking for their right to a future every Friday.

"For me, personally, I think this is week 74 of 'Fridays for Future' protests.

"We have done this for a long time, but we need to make clear that this is just the beginning.

"To the world leaders and those in power, I would like to say, 'You haven’t seen anything yet, you have not seen that last of us and I can assure you that'.

"That is the message we want to take to the World Economic Forum next week."

IOC President Thomas Bach has referenced climate change as one of the areas the organisation's new Future Host City Commissions would consider when examining the potential impact on the Olympic Games.

Bach previously claimed climate change had led to a reduced number of candidates bidding for the Winter Olympics, with ski resorts instead opting to prioritise investment in summer sports.

The IOC also opted to move marathon and race walk events from Tokyo to Sapporo amid concerns over the summer heat during the Olympic Games, while bushfires have caused concerns for player safety at the Australian Open tennis tournament.

This was highlighted in a post by the Athlete365 account, which warned "unreliable snowfall and temperatures are harming winter sports", while "increasing summer heat threatens the health of athletes, sports organisers and fans".

The IOC claimed it is fighting climate change and promoting sustainability.

The organisation stated that no new venues were built directly for Lausanne 2020, with existing facilities prioritised, while athletes, coaches, staff and media were being encouraged to use public transport.

Use of Swiss wood pellets for the Lausanne 2020 cauldron was also highlighted as an eco-friendly move.

Efforts from Tokyo 2020 and Paris 2024 to be carbon neutral were outlined by the IOC regarding future Olympic Games hosts, along with stating that Beijing 2022 venues will all use renewable energy.

The new headquarters of Olympic House has also been listed as one of the most sustainable buildings in the world, according to the US Green Building Council.

A hydrogen station was recently installed at the Olympic House to provide renewable fuel to eight hydrogen cars used by the IOC.

International Federations and National Olympic Committees will also be rewarded "through carbon offsets" if they can demonstrate willingness to tackle greenhouse gas emissions as part of a joint scheme between the IOC and Dow, the organisation's official carbon partner.