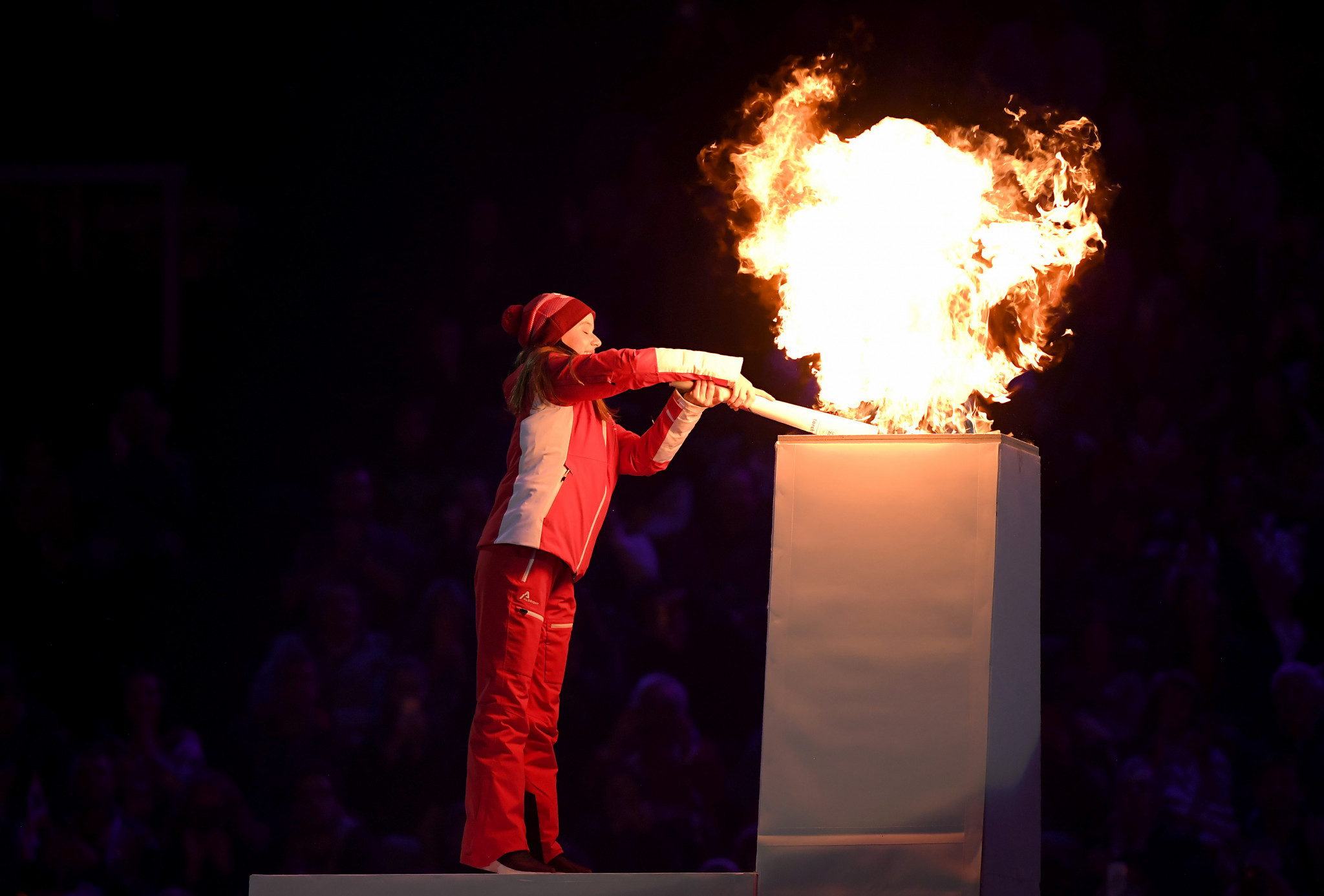 It fell to 14-year-old ice dancer Gina Zehnder - the youngest member of the Swiss team - to light the cauldron, setting the seal on the Opening Ceremony of these Winter Youth Olympic Games.

The flame had been passed to Zehnder by an aerialist, an image which brought back memories of the Chinese gymnast Li Ning, who soared on a wire to light the cauldron at Beijing 2008.

As she lit the flame, sparks from the cauldron soared across the big screen as a virtual flame connected the Olympic fire to all the main centres, including St Moritz, where a parallel Opening Ceremony took place 436 kilometres away.

Organisers said it would provide a "joyful awakening" across Lausanne 2020.

The flame had been brought into the arena by the final bearers, representing the distinctive linguistic regions of Switzerland.

The first to enter was Swiss-Italian skier Michela Figini, who won gold at the 1984 Sarajevo Olympics age only 17 and would still have been eligible for the Youth Olympics had they existed at the time.

Sandro Villetta, Olympic combined gold medallist at Sochi 2014, renewed his connection with the torch, less than a month after he had carried it in St Moritz.

The crowd were delighted to see skier Erika Hess, who carried the flame representing Swiss Germans.

Her stellar career included six World Championship gold medals, but her Olympic bronze came early in her career at Lake Placid 1980, when she was still a teenager.

Fanny Smith, who won bronze at Pyeongchang in 2018, had also carried the torch in Villars when it arrived to celebrate the new year.

Most in the sellout crowd had held their breath during a spectacular aerial ballet, all of whom were no doubt mindful of the horrific accident in rehearsal which left a Russian performer fighting for her life.

They are always distinct from the opening of an Olympic Games and this was no exception.

The vast majority of athletes were seated before it began and then came the parade of flags, headed by Greek alpine skier Christos Marmarellis.

The other standard bearers came in groups of three, until at last it was the turn of ski mountaineer Thibe Deseyn, representing the host nation and who predictably received the largest cheer of the night.

A spotlight then picked out a lone violinist as the familiar strains of Antonio Vivaldi’s Four Seasons.

Camille Jaquenoud and Guillaume Dutoit-Ruiz, both students at the Lausanne school of jazz and contemporary music, sang the Swiss national anthem high above the arena in a gondola ski lift.

There was also a superb rendition of Ludwig Van Beethoven's Ode to Joy from his ninth symphony on the Swiss alpine horn played by the Academie Swiss de Cors des Alpes.

The theme of the ceremony was ''home'', a recognition that Lausanne has been headquarters to the Olympic Movement since 1915.

IOC President Thomas Bach was forced to make light of a brief microphone malfunction, shortly before he was about to invite Swiss Confederation President Simonetta Sommaruga to officially open the Games.

Other children gathered to form the five Olympic rings as the flag was raised by the Swiss army to the strains of the Olympic anthem, originally performed in Greek at the 1896 Olympics and composed by Spiros Samaras.

Here it was sung superbly in English by a choir of schoolchildren.

Zakea Page, a young Ice hockey player from New Zealand who had designed the Olympic medal, painted his design on the floor of the stage using an ice hockey stick.

It is exactly a hundred years since the Olympic oath was first taken at the Antwerp Olympics of 1920.

Swiss junior figure skating champion Noah Bodenstein spoke on behalf of the athletes and was joined on the podium by ice hockey referee Eric Cattaneo and curling coach Stefen Meienberg.

All three took part in a ritual first introduced at the first Youth Olympics in Singapore.

''To every person who has ever been inspired by sport, we welcome you to the home of the Olympic Movement," added Lausanne 2020 President Virginie Faivre.

"We have been waiting for you."

As the official song of the Games rang around the arena, Faivre invoked the motto of these Games.

"This is your time, start now," she said.