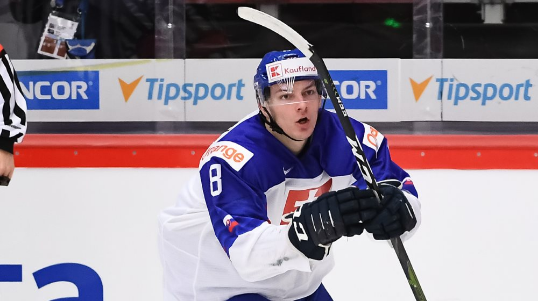 Daniel Vladimir Tkac scored the decisive goal with less than three minutes left in the Group A match at the Werk Arena in Třinec.

Tkac, born in Pittsburgh to Slovak parents, rushed to the net and banged in the rebound from Michal Mrázik's shot.

The play was ruled good after a video review.

Oliver Okuliar had earlier given Slovakia the lead before Maxim Musorov replied for Kazakhstan, who have now lost two games out of two following their defeat at the hands of Switzerland yesterday.

Oliver Wahlstrom extends the lead by 3 and it's 6-3 @usahockey with less than 10 minutes to go. #WorldJuniors pic.twitter.com/iAM60CxKuB

In Group B, the United States bounced back from their tough loss against Canada yesterday to overcome Germany 6-3 at the Ostravar Aréna in Ostrava.

Jordan Harris, Zac Jones, Shane Pinto, Curtis Hall, Bobby Brink and Oliver Wahlstrom all got their names on the scoresheet for the US.

In Group A, Finland face Slovakia before Switzerland meet Sweden.

The Group B matches pit hosts Czech Republic against Germany and Russia against Canada.