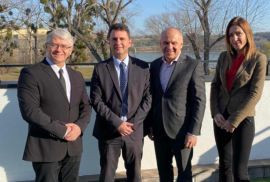 European University Sports Association (EUSA) President Adam Roczek noted the steady progress being made in preparation for next year’s European Universities Games (EUG) during a recent four-day visit to Serbia.

Roczek took part in several activities in Novi Sad and Belgrade, due to host the 2020 edition of the EUG from July 12 to 25.

Upon the invitation of the University of Belgrade’s Faculty of Sport and Physical Education, he attended a solemn session held on the occasion of its 81st anniversary, following which he delivered a keynote speaker address at a conference under the topic of "Trends and Changes in University Sport".

A presentation on the progress made so far was made.

That same day, the 1,000th volunteer application for the 2020 EUG was received by the Organising Committee’s office.

"Mr Roczek noted the steady progress made in preparations for next year’s big event, which has been declared a project of national importance by the Prime Minister of Serbia, Ms Ana Brnabić," an EUSA statement reads.

Roczek also met with Belgrade City’s Deputy Mayor Goran Vesić before the following day’s working meeting with the rector of the University of Belgrade, Ivanka Popović.

His final stop was in Novi Sad on the last day of the visit.