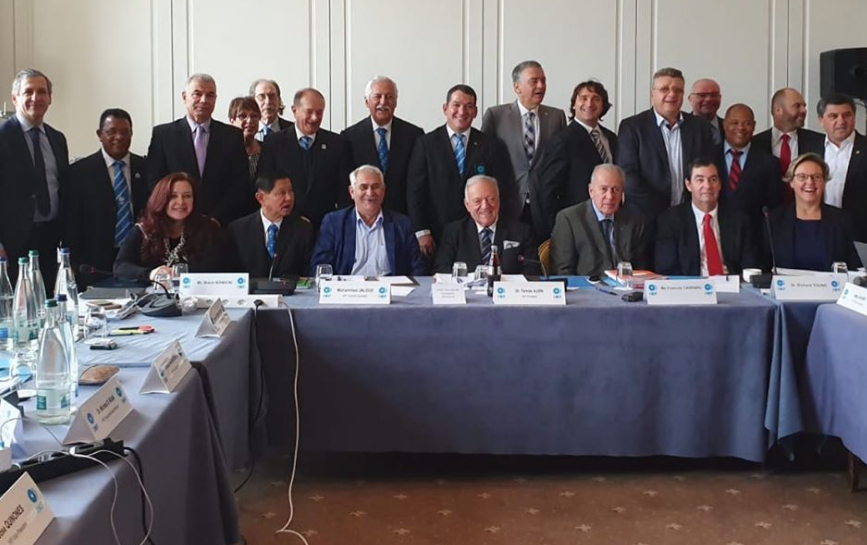 The International Weightlifting Federation (IWF) made the right moves as far as the International Olympic Committee (IOC) is concerned when its Executive Board backed a tough stance against doping in Lausanne tonight.

Unity was the theme of the day at an Extraordinary Executive Board meeting when opposition to an independent sanctions panel melted away, and a new collaboration with the Court of Arbitration for Sport’s (CAS) Anti-Doping Division was approved.

Thailand’s attempt to return to competition, despite a self-imposed ban for multiple doping violations, was stalled as the Executive Board awaits details of a Swiss court ruling.

Egypt, another suspended nation, lost the 2020 IWF Junior World Championships, which were to have been held in Cairo in March but have now been moved to Bucharest in Romania.

That good news for Romania was tempered by the announcement, also today, of another doping violation by one of its lifters, which is likely to affect the nation’s quota places at Tokyo 2020.

By far the most important business of the day in the Olympic capital was confirmation of the status of the Independent Member Federations Sanctions Panel.

The presence of David Luckes, associate director of the IOC’s sport department, and a senior representative from the CAS Anti-Doping Division demonstrated the importance of the meeting, whose main purpose was to discuss the future of the panel.

A number of Executive Board members - mostly from nations that cannot send a maximum team to Tokyo 2020 because of doping violations - had earlier proposed that the panel be disbanded.

They claimed that the panel was appointed rather than elected, despite the IWF’s official record of an Executive Board meeting that approved it in 2017.

The panel, which comprises legal and anti-doping experts from the United States, Germany, Canada and New Zealand, suspended Egypt for two years in September because of six positives by youth and junior lifters.

The IOC persuaded the IWF Executive Board of the importance of independent decision-makers, and the panel is now clear to rule on a formal punishment for Thailand whenever a slew of recent positives, including nine at the 2018 IWF World Championships, are closed.

In the build-up to the meeting Tamás Aján, the IWF President, had warned against "proposals whereby sanctioning powers might be returned to the IWF Executive Board, for whose members a conflict of interest may exist".

He warned any such moves would be a step backwards that would fail to honour the IWF’s commitments to, among others, the IOC.

Aján also accused Thailand of putting its own interests ahead of the sport’s Olympic status.

There will be no imminent return for Thailand now, despite a request to the Executive Board from the Thai Amateur Weightlifting Association (TAWA) for an amendment to their self-imposed ban.

An IWF statement said that further information was expected from a Swiss court, to which TAWA had taken its case, and from the Independent Testing Agency concerning a number of Thai doping violations.

The Executive Board "decided not to accept any modification to the undertaking (of self-imposed suspension, made in March) and TAWA’s request will be considered at the next meeting".

A new arrangement with the anti-doping division of CAS will make the IWF compliant with the 2021 World Anti-Doping Code.

Brent Nowicki, managing counsel of CAS Anti-Doping Division, made a presentation to the board, who then approved a new collaboration "that will ensure that only independent expert arbitrators adjudicate those cases where hearings are requested by the individuals concerned".

Aján was very happy with the outcome of the meeting.

"I am very pleased that the IWF Executive Board has displayed unity and wisdom when supporting the progressive proposals that confirm our commitment towards clean weightlifting, even more independence and credibility," he said.

The Romanian doping violation was by Paul Dumitrascu, a 19-year-old 73 kilograms lifter.

With 17 sanctions listed since 2010 and three violations outstanding, Romania is liable to lose two more possible quota places at Tokyo 2020.

Nations with 20 or more violations can send only one male and one female.

Two other violations were announced today.

The 2010 69kg world champion Mete Binay from Turkey, who has not competed since the 2012 Olympic Games in London, and the Taipei super-heavyweight Shih-Chieh Chen, seventh in the IWF World Championships in Pattaya this year and was well placed to qualify for Tokyo 2020.