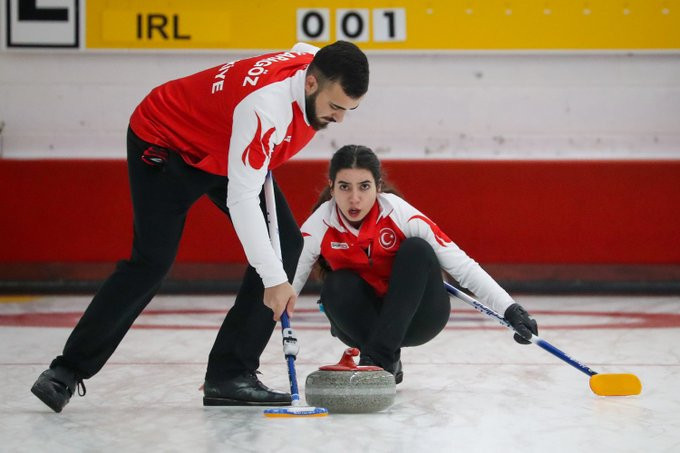 Germany, Turkey and Italy completed perfect records in the round-robin stage as the line-up for the play-offs was decided at the World Curling Federation World Mixed Doubles Qualification Event in Scotland.

The German pair of Pia-Lisa Schoell and Klaudius Harsch made it six wins out of six in Group A by beating Ukraine 11-1 and Denmark 7-6 at the Greenacres Curling Club near Howwood.

They were joined in qualifying for the play-offs by China, who finished on five wins and one loss after defeating Kosovo 10-3 and Guyana 13-2.

Wales ended bottom of Group A after losing 9-4 to Guyana and 11-3 to Kosovo.

France bounced back from their loss to beat Brazil 8-1 and secure the second qualification spot.

Today's three other matches in Group B saw Brazil edge Romania 7-6 and Belgium lose 8-7 to Ireland before defeating Saudi Arabia 7-6.

In Group C, Italy's Veronica Zappone and Simone Gonin overcame Hong Kong 9-8 and Poland 9-2 to maintain their 100 per cent record.

They finished on three wins and three losses along with Chinese Taipei, Hong Kong and Poland.

Chinese Taipei beat Slovenia 7-6, while Hong Kong and Poland both defeated Kazakhstan, by scorelines of 8-5 and 6-3, respectively.

South Korea and Austria both advanced from Group D with five wins and one loss.

The South Koreans thrashed Nigeria 13-0, while Austria overcame Slovakia 10-4 and The Netherlands 7-5.

Belarus also finished on five wins and one loss after thumping Nigeria 13-1, but they just missed out on a play-off spot.

In the two other games, Lithuania lost 10-5 to The Netherlands and 9-8 to Slovakia.

The play-offs will be spread across tomorrow and Saturday (December 7).

The final four places for next year’s World Mixed Doubles Curling Championship, due to take place in Canadian city Kelowna from April 18 to 25, are up for grabs in Scotland.