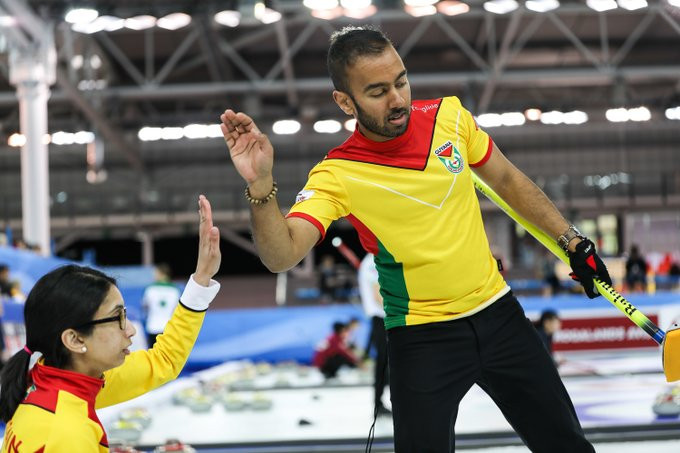 Denmark and Germany continued their perfect starts to the World Curling Federation World Mixed Doubles Qualification Event in Scotland today, registering a further two wins each in Group A.

The Danish duo of Christine and Martin Groenbech beat Kosovo's Eldena Dakaj and Peter Andersen 9-1 before defeating Guyana's Farzana Hussain and Rayad Husain 7-5 at the Greenacres Curling Club near Howwood.

Both Denmark and Germany have improved their records in Group A to three wins out of three.

China, 11-2 winners over Ukraine, are third with one win and one loss.

Wales are joint fourth with Ukraine, who they defeated 13-6 today.

In Group B, France and Turkey are tied for first place on two wins out of two.

Ireland and Romania share third spot on two wins and one loss, with the former having overcome Brazil 10-7 and the latter having beaten Saudi Arabia 13-4 and Belgium 7-3.

Italy lead the way in Group C after making it two wins out of two by overcoming Latvia 9-5.

They are followed by Hong Kong, Latvia and Chinese Taipei on two wins and one loss.

Hong Kong lost 9-6 to Chinese Taipei before beating Slovenia 10-3, while Latvia bounced back from their loss against Italy to defeat Kazakhstan 7-5.

Today's one other match in Group C ended in an 8-4 victory for Poland against Slovenia.

In Group D, The Netherlands occupy top spot with two wins out of two after beating Slovakia 10-8.

Austria, Belarus and South Korea are tied for second place on two wins and one loss.

Slovakia sit in fifth place following an 11-3 victory over Nigeria.

The final four places for next year’s World Mixed Doubles Curling Championship, due to take place in Canadian city Kelowna from April 18 to 25, are up for grabs in Scotland.