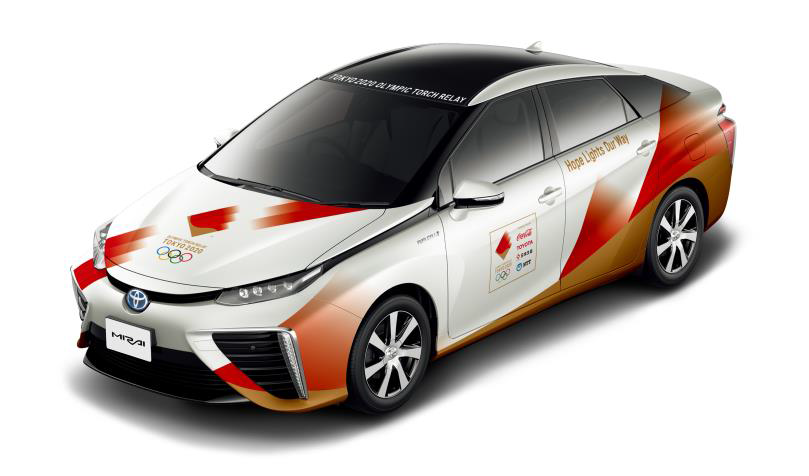 Tokyo 2020 has revealed the design which will feature on the vehicles in the Olympic Torch Relay convoy.

Vehicles will have an ochre-coloured part and a flame emblazoned on the side of the car bodies, which the Organising Committee claim depicts the journey of the Torch Relay.

The fukibokashi colour gradation techniques, used in woodblock printing, have been utilised for the background landscape.

Each vehicle will have a specific role during the torch relay, such as leading the convoy, checking routes in advance and supporting the Torchbearers.

Organisers say the vehicles share the same goal to "deliver the flame that will light the Olympic cauldron in the new National Stadium, incorporating the hopes and dreams of the Torchbearers and spectators cheering it along its way".

This message will be depicted in a sash emblazoned on the front, which will also feature on the Torchbearers' uniforms.

The convoy will be supported by presenting partner and Tokyo 2020's mobility partner, Toyota.

Tokyo 2020 say the relay will include a wide variety of vehicles and models, including environmentally friendly hybrid vehicles.

It is hoped the Torch Relay can create a festive atmosphere among the Torchbearers and the spectators.

The vehicle convoy begins its journey on March 26.

The Torch will arrive in Japan on March 20, after the traditional flame lighting ceremony in Greece.

It will first be displayed in the Tōhoku region, which was widely affected by the 2011 earthquake and tsunami which killed around 16,000 people.

Both Tokyo 2020 and the IOC want to use next year's Games to aid the region's recovery, with some using the term "Reconstruction Olympics".

The Japanese section of the relay will begin in the disaster-hit Fukushima region on March 26.

In all, the Japanese Relay will pass through all 47 prefectures in the country over 121 days.

Around 98 per cent of Japan's population are said to live within one hour's travel of the proposed route.

The relay will conclude at the recently completed New National Stadium in Tokyo, where the Opening Ceremony is on July 24.