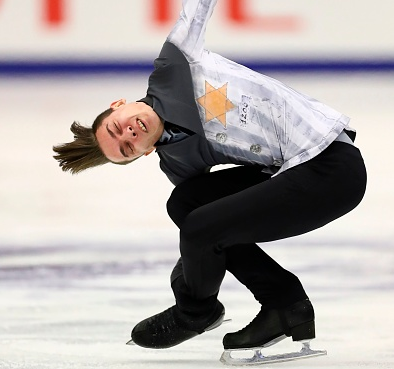 The International Skating Union (ISU) has changed its decision to nominate Anton Shulepov's free skate programme costume, which features elements of prisoner and guard uniforms from Auschwitz, for its costume of the year prize.

The ISU has claimed an error meant the costume was nominated in the long list for the prize.

The governing body said Shulepov's short programme costume should have been nominated instead.

Shulepov's free skate costume combined uniforms of an Auschwitz camp guard and a prisoner, with the Russian having skated to the music from Schindler's List.

Shulepov also wore the costume at the NHK Trophy event in Japan.

Over one million people died at the Auschwitz concentration camp under the Nazis, during the Second World War.

The decision to nominate Shulepov's outfit for the "costume of the year" award received a backlash on social media.

The ISU Figure Skating account issued a statement which claimed the costume had been nominated in error.

"The ISU regrets that by error the wrong costume (Free Skating instead of Short Program costume) of Mr Shulepov has been presented for voting,” the statement read.

"This error has been corrected and the ISU sincerely apologises for this mistake and the bad sentiments it has caused."

The ISU regrets that by error the wrong costume (Free Skating instead of Short Program costume) of Mr. Shulepov has been presented for voting.

This error has been corrected and the ISU sincerely apologizes for this mistake and the bad sentiments it has caused.

The long lists for a series of awards were launched by the ISU on December 1.

It marked the start of the online voting process opening, which will allow the media, public and ISU members to vote for their favourite nominees.

Four of the seven categories are open to the public to back their chosen skater, with their votes influencing the best newcomer, best costume, most entertaining programme and most valuable skater categories.

The public will not be able to vote for the three other categories, with best choreographer, best coach and lifetime achievement prizes also on offer at the inaugural awards.

The ISU announced the Skating Awards in October, which the governing body claim will be a "brand-new and exciting event combining breathtaking figure skating performances, entertaining music acts, astonishing artistic shows and a dazzling award ceremony".

The new awards are a joint venture between the ISU, Skate Canada and Art on Ice.

The first ceremony is due to be held during next year's ISU World Figure Skating Championships in Montreal on March 22.

Additionally, a mix of figure skating, dance and contemporary circus will be showcased, featuring music acts and several live performances, and is planned to include all of the 2020 ISU World Championship medallists.

Fans can vote until February 10 next year.

Media and ISU members can vote in six categories, but not the lifetime achievement award.

ISU members are unable to vote for candidates from their countries in the best newcomer, best costume, most entertaining programme and most valuable skater categories.

They will be able to vote for their representatives in the best choreographer and best coach categories.

Three nominees will be announced in each category on March 10.