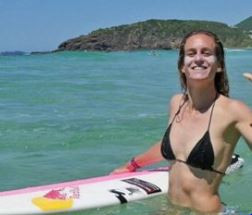 Dupont comes into the competition in the form of her life after conquering an estimated 70ft wave in Portugal earlier this month.

Official ratification of Dupont's achievement in Nazaré is still to come but it is thought the French star could have set a world record for the biggest wave ever recorded by a woman.

The offficial measurements will be posted in May 2020 during the World Surf League Big Wave Awards.

She told insidethegames: "This was my fourth winter in Nazaré and so we trained a lot and spent a lot of time there.

"It was sort of sweet and it was a wave I trained for for a long time.

"I was stoked about the wave and I knew I did something special."

Dupont said a lack of waves in Portugal after her record breaking achievements resulted in her calling the French team coach to make herself available for the Surf City tournament this week.

She added: "I love surfing and all kinds of surfing.

"The Atlantic and Pacific surf is off at the moment so I was checking the forecast and I knew it would be really good training for me.

"I didn't practice that much SUP in the last few years so it was a big chance for me to come back on the StandUp."

With just the SUP surf contests to come France lead the team Championship on 16,322 points, with Spain and the United States still in contention for gold on 14,922 and 14,762 points respectively.

A maximum of 3,720 points are still to play for in the men's and women's surf contests, putting Dupont in the box seat to bring home gold for France.

Heats get underway tomorrow, before the medals are awarded on Sunday (December 1), and Dupont claims she will give her all to win.

"With the French team it is nice and I love competing with the team," she said.

"It is really great and it is amazing to enter this competition.

"Every person in the team has done their job and the team effort comes by everyone doing their maximum.

"I will do my best that I can and then we will see where we are at."