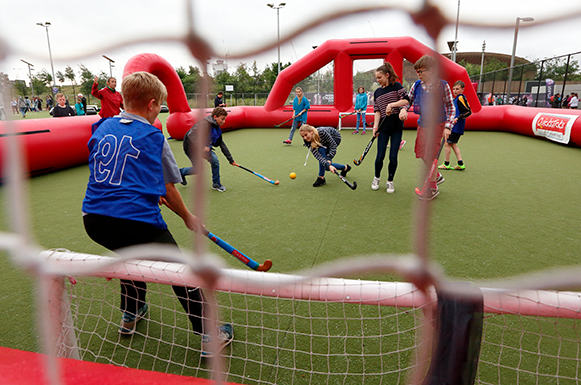 The colour blue has been used to symbolise World Children’s Day, a global day of action run by Unicef to call for improved children’s rights.

The FIH called for hockey groups in schools and colleges and national associations to show their support, through running tournaments, matches and hockey events, as well as wearing blue.

Staff at the governing body wore blue shirts at their offices in Lausanne during the day.

"We know sport is a powerful tool for change, so let’s make sure that we do our bit to help make the world a better place for the next generation," the FIH said.

Events took place around the world on the day, with children participation in national summits to discuss key issues impacting their future.

Children also took on roles in sport and the media to mark the event.

Famous landmarks around the world were also lit up in blue to show support for children’s rights.

The FIH also confirmed the winners of their Olympic Day competition, which took place in June 2019.

National associations were invited to enter projects that symbolised hockey’s ability to change lives for the better.

Chile were awarded the inclusion prize for their project which worked with women and minority groups.

This included work with people with physical and learning difficulties.

Afghanistan received the impact prize, after running a series of programmes in art and music, which celebrated hockey and its ability to break down barriers and promote peace.

Zimbabwe and the Czech Republic shared the prize for initiation, as part of the Hockey Dreams campaign.

A nationwide art competition in Zimbabwe invited children to paint or draw pieces which raised awareness of the inspirational power and beauty of sport.

The Czech Republic held a beach hockey tournament for children and their parents, which was aimed at demonstrating that hockey can be enjoyed anywhere by different communities.