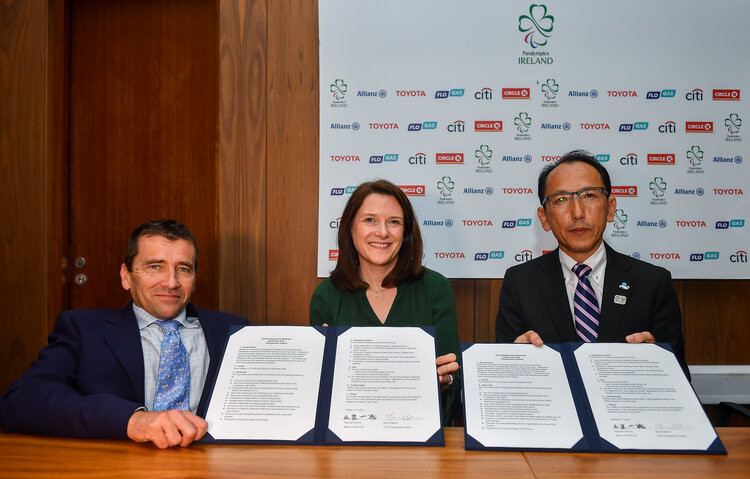 Paralympics Ireland has signed an agreement with Narita City to host the country’s team’s holding camp before next year's Paralympic Games in Tokyo.

Ireland’s team is due to arrive in Narita on August 11 and spend a week in the city to recover from the long journey and acclimatise to the weather in Tokyo.

Narita is situated one hour’s drive or 60 kilometres to the north west of Tokyo.

Narita City was represented by general manager Katsuji Shimizu at the recently-held Paralympics Ireland team conference, which took place at the Sport Ireland Campus in Dublin.

He was joined by Paralympics Ireland chief executive Miriam Malone in signing an official agreement for Narita to be the holding camp hosts for Ireland’s team.

"Narita City will be a fantastic home city for Team Ireland at a crucial stage of our Tokyo 2020 Paralympic Games preparation," Denis Toomey, Ireland’s Chef de Mission for the Paralympic Games, said.

"Narita have been superb to work with to date and have been incredibly accommodating.

"I would like to thank Katusji Shimizu and his delegation for coming to Dublin and I am very much looking forward to bringing Team Ireland to Narita next August."

Paralympics Ireland has also announced a formal agreement with the Sport Ireland Institute that will see both organisations work together in partnership to support the Para-athletes on their journey to Tokyo 2020.

As part of the agreement, the Sport Ireland Institute will provide services to Irish Para-athletes and Ireland's team, and will also provide sports science and medical support staff as part of the Irish Paralympic team that travels to next year’s Paralympics.

Sport Ireland Institute staff will form a major part of the Paralympics Ireland sports science and medical team at Tokyo 2020.

"We are delighted to have the support of the Sport Ireland Institute at the Tokyo 2020 Paralympic Games," Toomey said.

"The Sport Ireland Institute staff will make a great addition to Paralympics Ireland’s own sports science and medical team.

"The Sport Ireland staff are already very familiar with our Paralympic athletes and that trust that has been built up over time will be a major boost to the team as we prepare for the Tokyo Paralympic Games."

Sport Ireland Institute director Liam Harbison added: "We are delighted to have signed a formal partnership with Paralympics Ireland to provide performance support services for Tokyo 2020.

"We are also pleased to have five of our team from the Sport Ireland Institute appointed to the Irish Paralympic Team for Tokyo.

"We look forward to supporting the athletes and their support teams in the build-up to what promises to be a fantastic Paralympic Games."