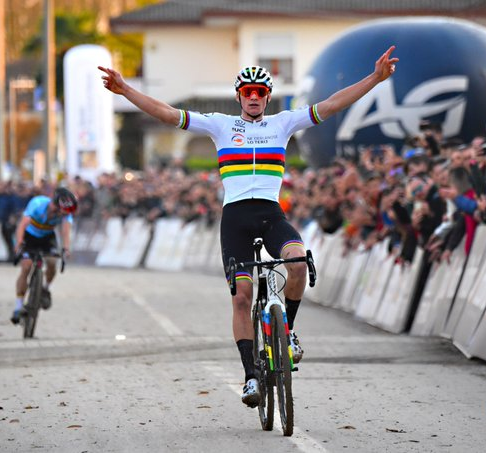 The Dutch star was the favourite heading into the European Cycling Union event in the Venetian town.

He faced a strong challenge from Belgian rider Eli Iserbyt throughout the duration of the competition.

Iserbyt was forced to settle for the silver medal after crossing the line three seconds behind.

The podium was completed by Belgium's Laurens Sweeck, who was 20 seconds adrift of the winner.

The Dutch celebrated double gold in the elite races as Yara Kastelijn won the women’s race.

Kastelijn broke clear on the first of the four laps and built her advantage over the field.

She finished in a winning time of 41:05, with Italy’s Eva Lechner ending 12 seconds behind.

The Netherlands’ Annemarie Worst rounded off the podium in 41:31.

There was further success for the Dutch team as Ceylin Del Carmen Alvarado reigned supreme in the women’s under-23 event, finishing ahead of Britain’s Anna Kay and France’s Marion Norbert Riberolle.

France’s Mickael Crispin won the men’s under-23 title, with Belgium’s Timo Kielich and Antoine Benoist of France completing the podium.

There was a Belgian one-two in the men’s junior race with Thibau Nys winning from team mate Jente Michels.

A clean sweep of women’s titles for The Netherlands was sealed by Puck Pieterse after she won the maiden junior event.

France’s Olivia Onesti and Shirin Van Anrooij of the Netherlands completed the podium.