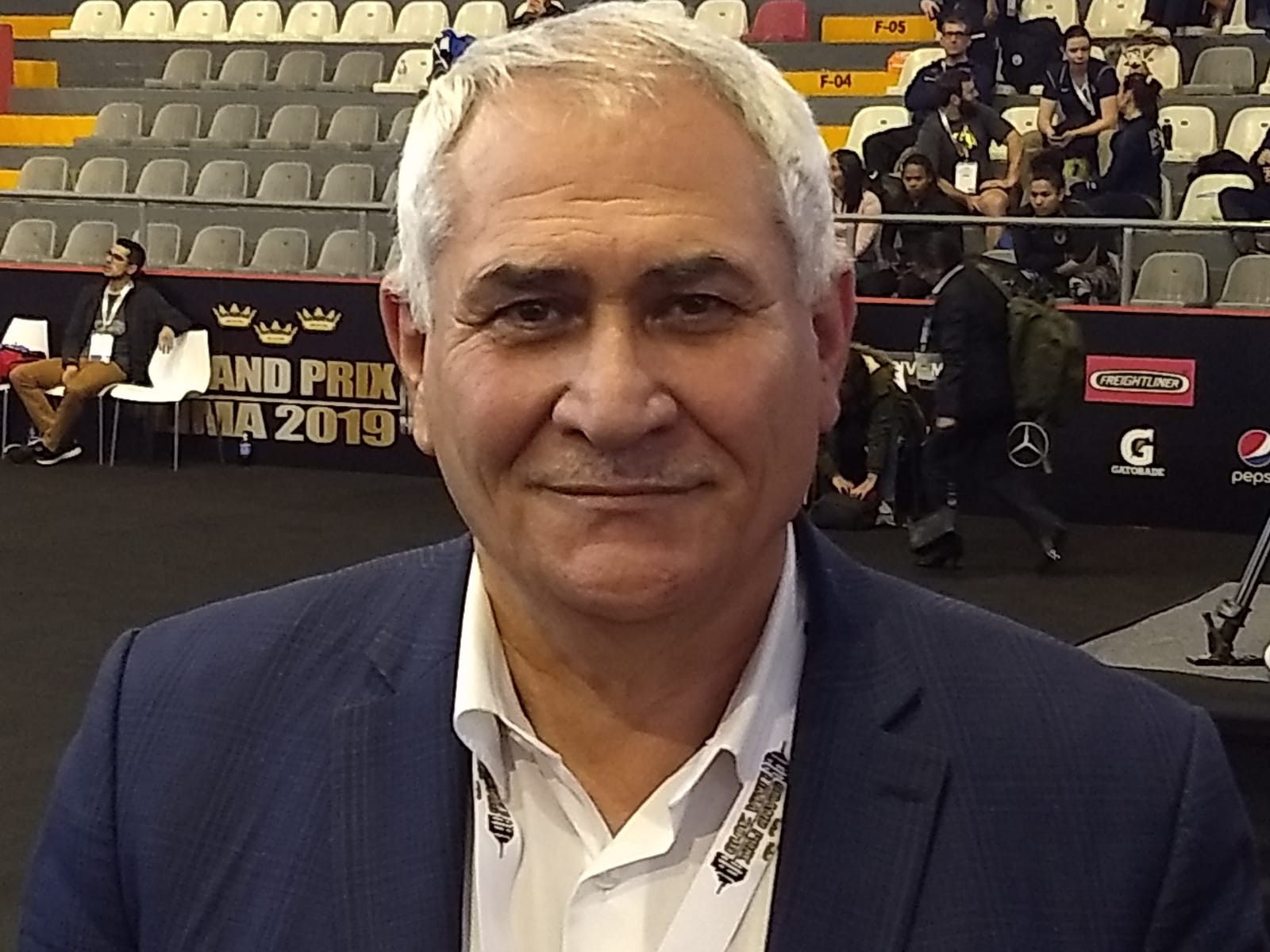 The International Weightlifting Federation (IWF) should scrap the body that dishes out punishment to nations with multiple doping offences and turn instead to the International Testing Agency (ITA) and its own board members, according to IWF general secretary Mohamed Jaloud.

Jaloud’s comments, and further criticism of the IWF’s leadership from Russia and Egypt, highlight the rift in the governing body’s Executive Board, which is due to hold an extraordinary meeting in Lausanne in the first week of December.

"We should hand over everything to the ITA, and after taking their advice the Executive Board should decide on punishments.

"We did not vote for the creation of the sanctions panel."

The ITA is now overseeing anti-doping procedures for the IWF through a partnership signed just over a year ago and updated in May, but does not play a role in sanctioning.

Jaloud and several other Executive Board members also complain the panel is not truly independent as its members were appointed by the IWF leadership.

Tamás Aján, 80, who has held high office at the IWF since the 1970s and has been President throughout the twenty-first century, has been criticised by a number of board members unhappy with the way nations are excluded from the sport or denied Olympic quota places.

Egypt and Thailand are out of Tokyo 2020, while five nations - Russia, Kazakhstan, Armenia, Belarus and Azerbaijan - can send only two athletes because they have had 20 or more doping violations since the Beijing 2008 Olympic Games.

Another 12 countries are restricted to a maximum of four places, while nations with a clean record can send eight.

In total, 76 quota places have been forfeited.

Seven of the Executive Board’s 21 members are from nations who are excluded from Tokyo or have lost quota places, some of whom may be subject to disciplinary decisions made by the panel.

Weightlifting has overhauled its anti-doping programme, signed the partnership with the ITA and devised a new Olympic qualifying system in the past two-and-a-half years.

Those nations with the worst doping records since Beijing - the first Games where the International Olympic Committee (IOC) stored samples for later retesting with improved science - have been punished.

While disaffected IWF Executive Board members complain that clean young lifters in 2019 are paying the price for doping by retired athletes 11 years ago, the IOC has responded by removing the threat of expulsion from the Games that was hanging over weightlifting.

But the IOC continues to keep a watchful eye and has written to the IWF to warn against changes, saying it would be "very concerned" if there was a move to welcome back Thailand.

Thailand excluded itself from Tokyo 2020 after nine of its team at the 2018 IWF World Championships tested positive, but is trying to work out a way back for its youth and junior lifters.

A few weeks ago Jaloud helped to formulate a proposal - with Intarat Yodbangtoey, first vice-president of the IWF and honorary president of the Thai federation - that Thailand’s youth and junior athletes should be allowed to return to competition this year, with the seniors coming back in April 2020.

As things stand, once all ongoing violations are closed, Thailand would be subject to a punishment - up to a four-year suspension - meted out by the Independent Member Federations Sanctions Panel.

Under the proposal drawn up by Jaloud and Yodbangtoey, the sanctions panel would be sidelined and the disciplinary measures would be decided upon by the Executive Board

The creation of the panel, and its level of independence, is at the heart of the rift in the Executive Board.

Both Jaloud and Agapitov deny the IWF’s officially recorded version of events, that an Executive Board meeting in Colorado Springs in 2018 voted unanimously for the creation of the panel.

"We thanked the Clean Sport Commission for suggesting it but we did not vote,” said Jaloud, who like Yodbangtoey holds one of the highest offices in the IWF.

Agapitov, an Executive Board member, also said there was no vote.

The sanctions panel recently announced a two-year suspension of Egypt nearly three years after seven of its athletes tested positive at a training camp.

There were procedural delays in closing those cases, some of which involved minors, but Mahmoud Mahgoub, president of the Egyptian Federation, said the matter had been poorly handled by the IWF and is appealing to the Court of Arbitration for Sport (CAS).

Egypt had another six athletes test positive at this year’s All African Games in Morocco but Mahgoub pointed out that it had never had a doping violation at the Olympic Games.

"There are nations that had gold medallists disqualified from the Olympics that are free to send a maximum team to Tokyo,” said Mahgoub.

"Does that seem right?”

He was referring mainly to China, which had three gold medallists disqualified from the Beijing 2008 Olympic Games.

A total of 57 weightlifters have tested positive in the IOC retests from Beijing 2008 and London 2012.

"If the IOC had the same rules as the IWF - if they treated their International Federations the same way the IWF treats its own member federations - surely Tamás would be suspended, because he would be held responsible for all the positives at the Olympic Games," said Agapitov.

"That shows that the IWF system does not work.

"The responsibility for doping violations, and subsequent punishment, is always on the National Federation.

"This makes it demotivating for federations to catch their own cheats.

"They may suspect an athlete is cheating, carry out the tests and catch them; but then the federation itself is punished for its own good work.”

Jaloud - who spoke to the ITA at a meeting in Warsaw last month - also took up the theme of punishing clean, often young, athletes for cheating by others.

"If you have one criminal in a family do you kill the whole family?" He said.

"Of course we must punish cheats but we must also take care to encourage clean lifters."

He cited the case of Mohamed Ehab from Egypt, one of the sport’s most popular lifters who has never tested positive at international level and is now out of Tokyo 2020.

Jaloud said his quest was to have zero doping at Tokyo 2020, and he took heart from the fact that there had been no positives at the 2019 IWF World Championships in Thailand in September.

"We must give everything to the ITA - anyone appointed by me, or by Tamás is not independent,” he said.

"There must be no interference in independent bodies or they are not independent.

"The ITA is the reality of independence.

"The ITA would give us advice, make recommendations (about multiple doping offences) and the Executive Board of the IWF would act on that advice.

"Federations can then go to CAS if they are unhappy.

"The board is the highest decision-making body in the sport, as written in the constitution of the IWF.

"I was a happy man when the IOC created the ITA, as it can end all the problems of international Federations.

"It is genuinely independent.

"The IOC would be happy if we put everything in hands of the ITA and I think not just a majority, maybe all the board would support this idea."

Jaloud, who competed at the IWF World Championships in 1981 and was general secretary of the Iraqi Weightlifing Federation for 26 years, became IWF general secretary in 2017 when Aján was re-elected as president.

"Taking sport away from politics” is one of his aims, he said, though when asked if he was keen to stand as president of the IWF in the 2021 elections he said: "In my opinion it’s not about leaders, it’s about the whole Executive Board working united and honestly.

"I am working only to make weightlifting clean, in my role as general secretary.

"Our past shames me.

"It was a dark period for weightlifting."

In the four medal events on day two of the IWF Grand Prix there were wins for Canada, Colombia, Venezuela and Colombia.

Maude Charron of Canada won the women’s 64 kilograms, in which European champion Loredana-Elena Toma of Romania bombed out in the snatch, while Colombia’s Leidy Solis, world champion at 81kg, won the 76kg with a total of 251kg.

Julio Mayora of Venezuela, the Pan American Games champion, won the men’s 73kg ahead of 19-year-old CJ Cummings of the United States, who narrowly missed two junior world record attempts but is now all but assured of a place at Tokyo 2020.

The most impressive winner was Zacarias Bonnat of Dominican Republic, whose total of 366kg in the men’s 81kg was a career best.

Aján was presented with an award for his contribution to weightlifting by organisers of the Lima Grand Prix yesterday night at the historic San Marcos University.