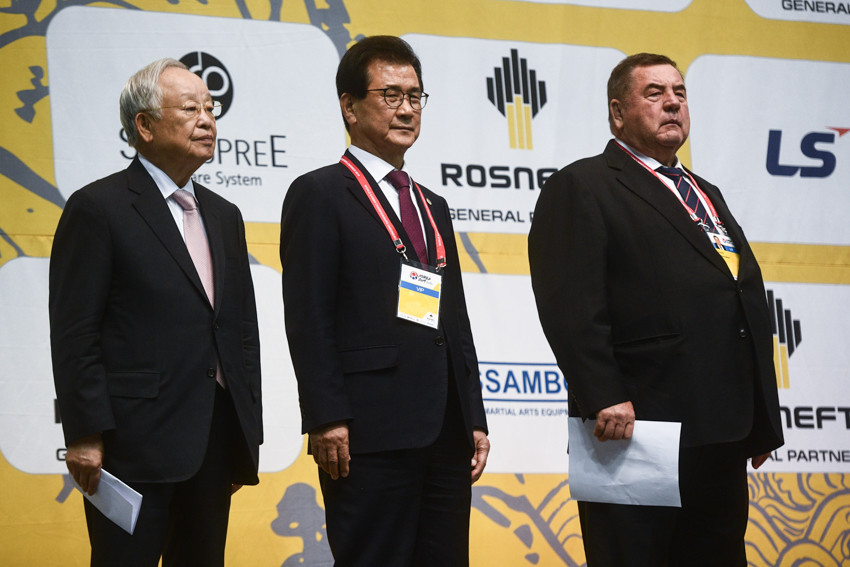 Hosting the International Sambo Federation (FIAS) World Sambo Championships could help North Chungcheong Province cement itself as a capital for martial arts, according to the region's Governor Lee Si-jong.

Speaking at the Opening Ceremony for the three-day championships at Sukwoo Culture Gym here, Lee believes staging the event will add to the province's already-rich sporting heritage.

"We had World Martial Arts Masterships in August," said Lee.

"It was like the Olympics for martial arts and our province is very famous for this.

"We have a long history and we are trying to make our province as the World Masterships Committee development.

"So we organised the World Martial Arts Consul which unites many martial arts like sambo, taekwondo, judo and so on."

Lee said Championships such as the sambo event here were very helpful for citizens health and wellbeing and claimed the events are very popular among young people.

"Sambo is developing in Korea very well and we have hosted several international sambo competitions," he said.

"Sambo was in the Asian Games programme last year and we are very sure that sambo will be in the Olympic Games soon.

"As Governor, I will support sambo's development, especially in our province."

FIAS President Shestakov continued: "I might add that sambo competitions are very spectacular and powerful.

"Everyone here has said they very much like the competitions.

"It is very important for us to develop sambo very evenly in all countries so participation in the World Championships are very valuable for us.

"Sambo is getting more popular thanks to UFC [Ultimate Fighting Championship] because sambo athletes are very successful in those 'fights.'"

More than 60 artists performed during the Opening Ceremony as a marching band before Shestakov opened the Championships, wishing athletes well in their world title ambitions over the next three days.

A traditional South Korean dance was demonstrated during the 45-minute showcase before the medal action began.