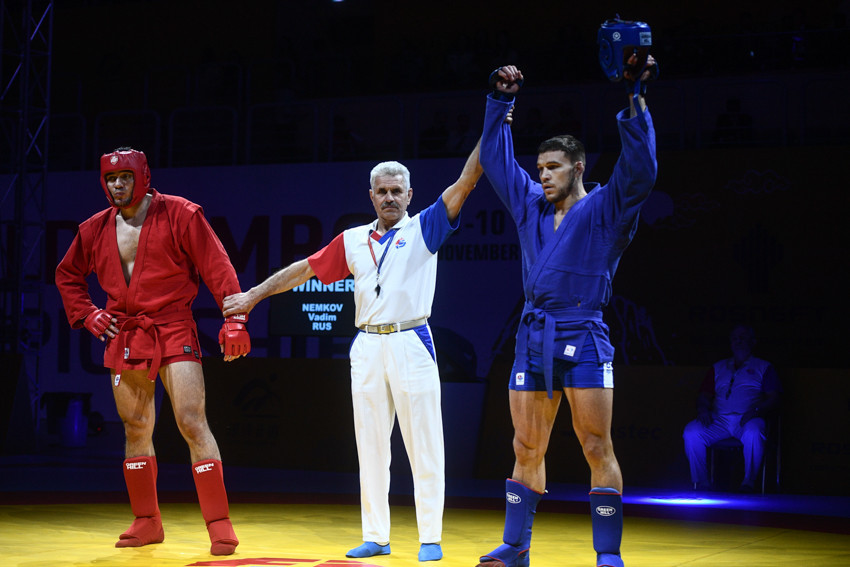 Russia began the 2019 International Sambo Federation (FIAS) World Sambo Championships in a similar manner to how they fared in Bucharest 12 months ago, collecting seven golds on the opening day here.

At the 2018 World Championships in Romania, Russia claimed 15 of the 27 golds on offer.

They showed their intent in the South Korean city by collecting medals in all nine events on day one of competition.

At yesterday's FIAS Congress, President Vasily Shestakov spoke of Russian dominance coming under threat here in Cheongju, but there were no signs of that today.

Only Alexsander Nesterov was returning for Russia as defending champion and he duly obliged in retaining the combat sambo under-57 kilograms world title.

He was not in the mood to hang around against Kazakhstan sambist Serikzhan Tussupov, securing gold inside 90 seconds.

The bronze medals were awarded to Ahmet Tanriberdiyev from Turkmenistan and Togtokhbayar Nyamkhuu of Mongolia.

While Russian glory may not have been a major shock to the Korean fans in the arena, Anastasiia Khomiachkova's 72kg gold was.

She was up against defending champion Nino Odzelashvili from Georgia, the pre-tournament favourite.

In a cat and mouse battle for gold, Khomiachkova edged into a 1-0 lead and she held off the Georgian's efforts to get back on level terms.

Russia completed the sweep of women's gold medals, with Olga Mitina securing an 8-0 win against Aurore Cabanne of France.

Altansukh Dovdon looked confident through the preliminary rounds and he overcame Mindia Luluashvili of Georgia in the final, with Russia's Mikhail Vorobev collecting bronze alongside Emil Hasanov of Azerbaijan.

Russia were also forced into bronze in the combat sambo 74kg category.

The gold medal went to Vladyslav Rudniev, who sealed a narrow 1-0 victory against Istam Kudratov from Uzbekistan.

Tomorrow, the Championships are due to continue with the women's 52kg, 64kg and over 80kg events.

The men will battle it out for 57kg, 74kg and 100kg gold while the combat sambo medals will be presented in the 62kg, 82kg and over 100kg contests.

A blind sambo demonstration will also be held between the end of the preliminary rounds and the medal programme tomorrow afternoon.