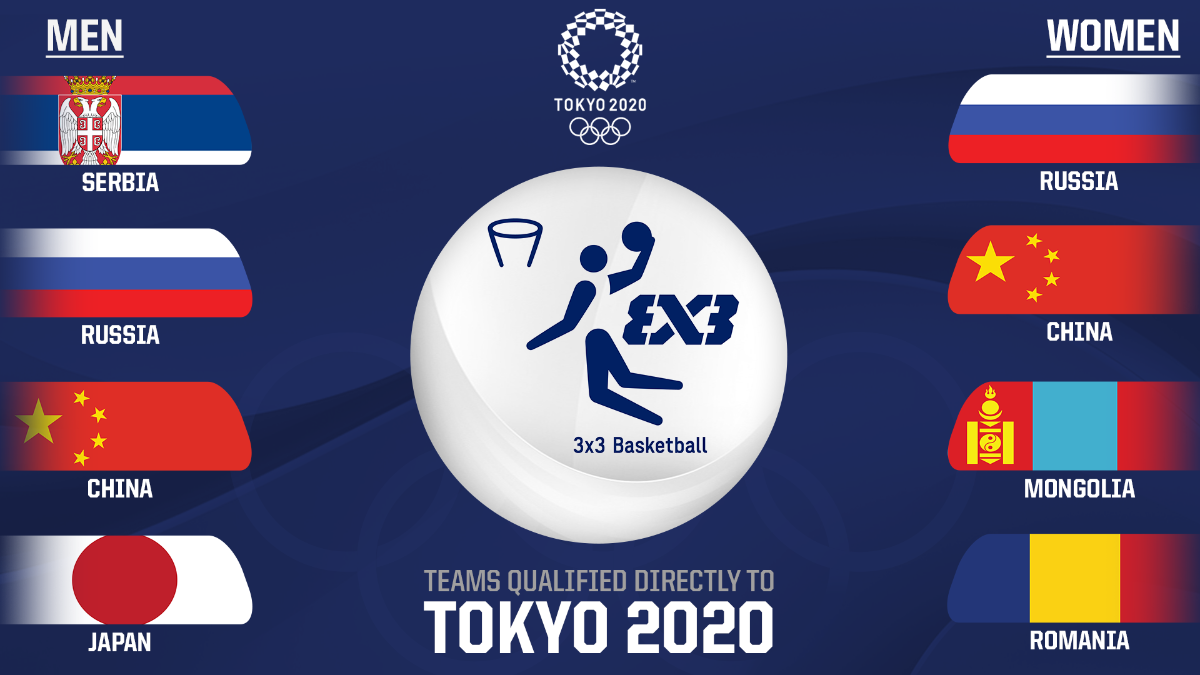 The International Basketball Federation (FIBA) has confirmed the four men's and women's teams to have directly qualified for the 3x3 basketball competitions at Tokyo 2020.

The teams were revealed during a live-streamed show at Utsunomiya in Japan, prior to the FIBA 3x3 World Tour Final.

Russia, China, Mongolia and Romania were confirmed as the first four women’s qualifiers for Tokyo 2020, where 3x3 basketball will make its Olympic debut.

The quartet topped the FIBA 3x3 federation ranking to seal a berth.

Serbia, Russia and China clinched the first three men's spaces, with the trio also joined by Japan as the host nation.

FIBA say the federation ranking is calculated by adding up the FIBA 3x3 individual world ranking points of the top 100 nationals, rewarding the elite performances of the players and 3x3 activity in the territory of each national federation.

The next three berths for the men's and women's tournaments will be determined at the FIBA 3x3 Olympic qualifying tournament in India in March.

India will take part in both competitions as the hosts, while Japan's women’s team were assured of a place.

It followed an automatic ticket to the Games only being granted to the highest-ranked Japanese team under criteria published by FIBA.

With Japan's men's team having earned the direct spot, the women’s team can qualify via either the Olympic qualification tournament or at the last-chance universality qualification competition.

Pool A of the women’s Olympic qualifier will feature France, United States, Germany, Uruguay and Indonesia, while Iran, Japan, Ukraine, Turkmenistan and Australia contest Pool B.

The men's competition sees Mongolia, Poland, Brazil, Turkey and Spain participate in Pool A, while the United States headline Pool B against Lithuania, Belgium, South Korea and New Zealand.

Slovenia, France, Qatar, the Philippines and the Dominican Republic are drawn in Pool C, with the Netherlands, Latvia, Canada, Croatia and India in Pool D.

The teams were decided due to either winning a medal at the FIBA 3x3 World Cup 2019 or because they were the highest-ranked teams in the FIBA 3x3 federation ranking not yet qualified.

A maximum of 10 teams per continent and a minimum of 30 different countries had to take part at the Olympic Qualifying Tournament.

This meant only the top six teams qualified for the tournament based on ranking could have a team both in men and women, such as France, the Netherlands and USA.

The last 10 berths in each gender were allocated following the federation ranking list only if the respective country didn't already have a team in any gender qualified.

The Universality Olympic Qualifying Tournament will determine the final spot for each gender, in Budapest in April.