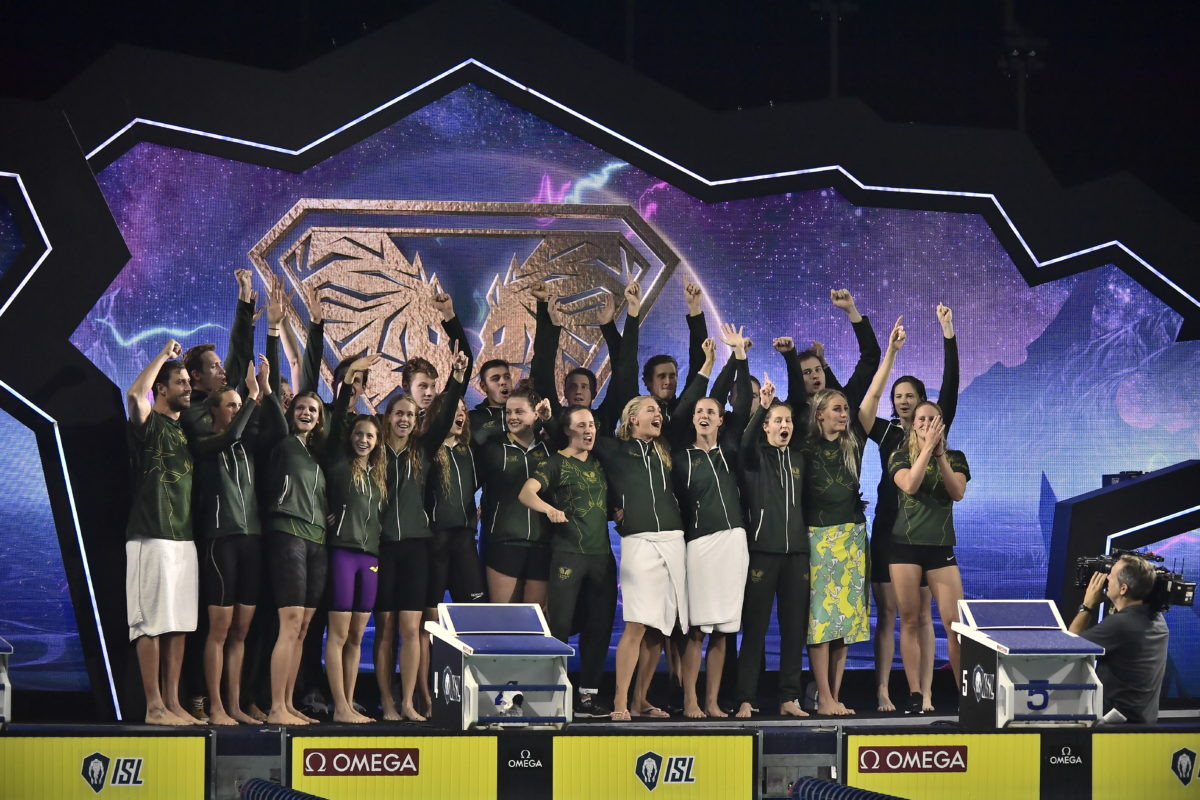 London Roar held onto their lead on the final day of the International Swimming League leg in Lewisville, winning the match by 27.5 points ahead of LA Current in front of a sold-out crowd.

The Roar had established a 19-point advantage after day one and attacked early, winning five of the first seven events to extend their advantage up to 43.5 points at the American city's LISD Westside Aquatic Center.

The Current began to chip away at that total, bringing it down to 19.5, but a disqualification for their second team in the mixed 4x100 metres freestyle relay saw their disadvantage balloon back up to 35.5.

The match-ending skins, a three-round 50m freestyle eliminator that can score up to triple points in the final, was not as big of a factor in the club scores as had been seen in the previous matches.

London put one swimmer into the women’s final - Australia’s Emma McKeon - and LA did the same in the men’s with Nathan Adrian of the United States.

Both placed second with the difference between the two teams only changing by nine points, in favour of the Roar, during the skins.

The Netherlands' Ranomi Kromowidjojo and Russia's Vladimir Morozov, both of Iron, were the winners with times of 24.46sec and 22.21, respectively.

The victory for Morozov solidified him as the match’s Most Valuable Player (MVP), awarded to the swimmer who amasses the most points for his or her team.

The 27-year-old also placed second in the men’s 100m freestyle, clocking a time of 46.29 to finish 0.07 seconds behind Roar’s Kyle Chalmers of Australia, and he also had wins in the 50m freestyle and 50m breaststroke on Saturday (October 19).

"That was the first time I’ve ever done it," Morozov, who topped the MVP standings with 43.5 points, said of the skins.

"It was super tough, especially with the star-studded field that we had."

McKeon was the top performer for the Roar, scoring 42 points to rank second in the MVP standings.

In addition to her second-place finish in the skins, an event in which she was a last-minute replacement, the Australian also won the women’s 200m freestyle and 100m butterfly on day one and swam on both of London’s winning relays today.

Also shining for the Roar were Australia’s Minna Atherton and Cate Campbell.

Atherton completed her sweep of the women’s backstroke events with victory in the 100m in 55.43 and led off the triumphant women’s 4x100 medley relay team.

Campbell picked up her second individual title of the weekend in the women’s 100m freestyle in 51.37, placed third in the skins and also contributed on both winning relay teams.

Iron, who were firmly entrenched in third place throughout the day, had a phenomenal showing with six wins.

Owner and captain Katinka Hosszú of Hungary was the lone swimmer to win two individual events, claiming the women’s 200m individual medley crown in 2:06.22 and 200m butterfly in 2:05.52 to give her 39 points overall and third place in the MVP standings.

Iron not only won six of the last 10 events on the schedule, but also scored almost as many points as the Roar and Current did despite being well behind them in the overall standings.

Current only mustered three victories today, highlighted by American Andrew Seliskar coming out on top in the men’s 200m individual medley in 1:54.17 to finish off his sweep of the medley events.

American Breeja Larson of the NY Breakers pulled out her club’s lone win of the match in the women’s 100m breaststroke, edging out Iron’s Alia Atkinson who had prevailed in the 50m breaststroke on day one.