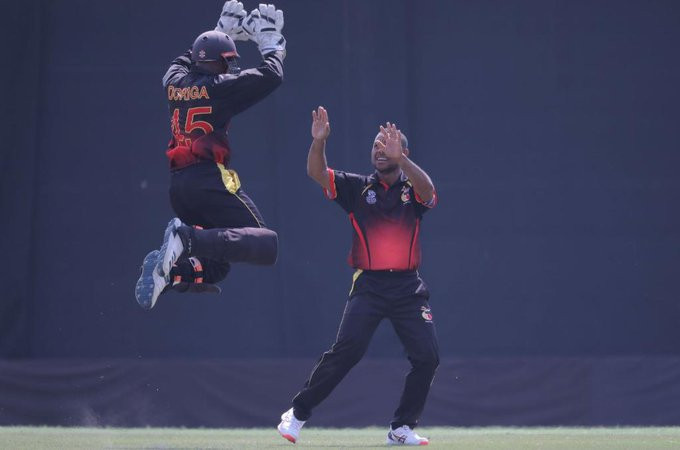 Papua New Guinea beat Namibia by 81 runs today to make it two wins out of two in Group A at the International Cricket Council (ICC) T20 World Cup Qualifier in the United Arab Emirates.

Tony Ura and man-of-the-match Assad Vala were in fine form, scoring 71 and 48 runs respectively, as Papua New Guinea set their opponents a target of 198 to win at ICC Academy Ground No. 2 in Dubai.

Singapore also maintained a 100 per cent record in Group A after defeating Bermuda by five wickets.

Navin Param's 41-ball 72 helped Singapore recover in the chase and reach their target of 150 after 19.3 overs.

Canada seal their win with a 👌 run-out! Jersey are bundled out for 123, losing by 53 runs. #T20WorldCup | #CANvJSY | SCORECARD ⬇️ https://t.co/rrXwk0V4dL pic.twitter.com/3aOkSeNgCb

In Group B, Canada opened their campaign with a 53-run victory over Jersey at Sheikh Zayed Cricket Stadium in Abu Dhabi.

Jersey, who overcame Nigeria yesterday, were bundled out for 123 after Nitish Kumar had top scored for Canada with 83 off just 36 balls to help his team end on 176/5.

Today's other match in Group B saw Oman follow up their win over hosts UAE on Friday (October 18) with a seven-wicket victory at the expense of Hong Kong.

Aqib Ilyas and captain Zeeshan Maqsood guided Oman to success, with the team ending on 106/3 after 17.3 overs.

Three-wicket-hauls from Aamir Kaleem and Khawar Ali had earlier restricted Hong Kong to 102.

Action in the UAE is due to continue tomorrow.