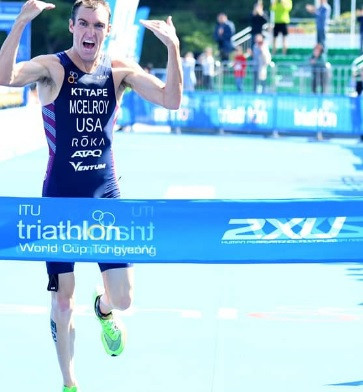 Matthew McElroy of the United States powered home to victory in the men's race at the International Triathlon Union World Cup in Tongyeong.

McElroy, ranked 25th in the world, clocked 51min 25sec to seal an impressive win in the South Korean city.

Fajardo completed the course in 51:33 to take silver in front of McElroy's compatriot Kevin McDowell, third in 51:35.

"I feel great and tried to have fun today," said McElroy.

"As soon as I saw the TV, I knew I had a bit of a gap from fourth and that I had a podium.

"As soon as I kicked it up on the hill, I cam flying down and just didn’t look back."

Sandra Dodet of France upgraded her silver from the corresponding event last year to gold as she won the women's race.

Belgium's Claire Michel finished in 57:18 to earn the bronze medal.

"I gave everything today."