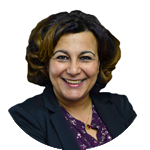 Lana Haddad has been promoted to chief operating officer at the International Olympic Committee (IOC) as part of a restructure of several of the organisation's departments.

Haddad, who joined the IOC in 2013, will move up from her previous role as chief financial officer.

Haddad was originally born in Iraq but is now a British citizen.

She is graduate of Swansea University, where she got a degree in chemical engineering before qualifying as a chartered accountant.

She has worked at the IOC since 2004 and had been the lead for the IOC on Olympic House, its new state-of-the-art headquarters it moved into earlier this year.

Sallois is also in charge of the implementation of the IOC Sustainability Strategy and the IOC Legacy Strategic Approach, core to the Olympic Movement’s strategic roadmap, Olympic Agenda 2020.

Christian Klaue has been promoted as director of the corporate communications and public affairs department.

The German started his career as a journalist at Sports Information Service before joining the German Olympic Sports Confederation, where his career has been closely ever since to IOC President Thomas Bach.

Klaue is expected to take on many of the responsibilities of Rebecca Lowell Edwards, the American who quit as as strategic communications director in September 2018 after less than 18 months in the role.

The changes were made following discussions between the HR Committee and Executive Board, the IOC claimed.

The reshuffle of various positions with the IOC comes amid an overhaul of the organisation's internal structure and follows the appointment of Christopher Carroll as its first director of digital engagement last month.

Carroll, who has previously worked for the likes of sportswear company Under Armour and The Olympic Partner (TOP) sponsor Coca-Cola, will head up the newly-created department on digital engagement.

Aneesh Madani, a former executive at Twitter, joined the organisation as head of digital partnerships earlier this year.

In a statement, the IOC claimed the changes will "strengthen the efficiency and agility of the organisation".

The IOC also said it had "taken advantage" of the move into its new Olympic House headquarters.

"The IOC is adapting to a changing landscape and is streamlining its operation," it added.