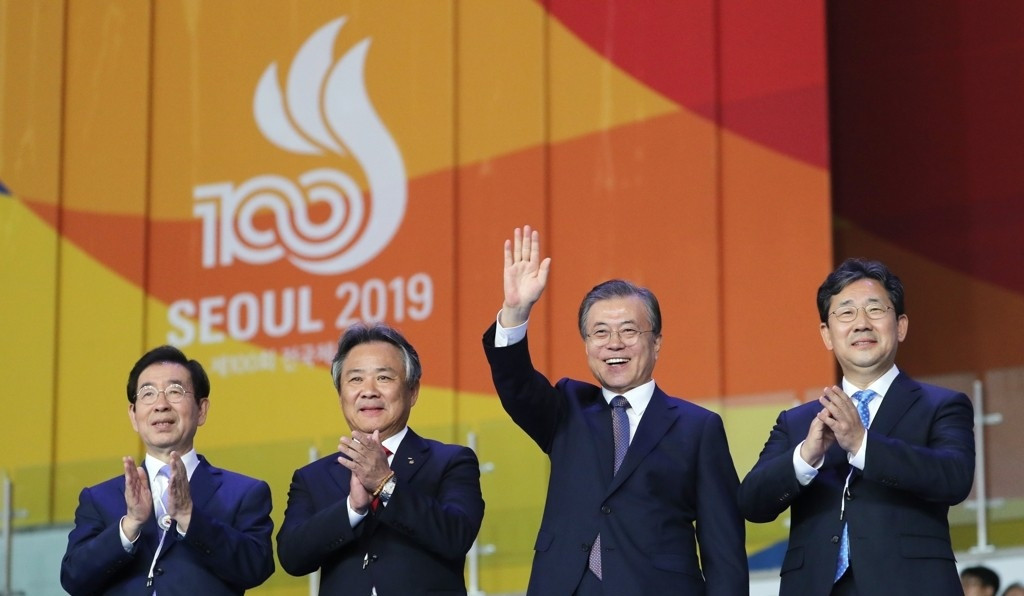 South Korean President Moon Jae-in has urged the public to back Seoul's proposed joint bid with Pyongyang for the 2032 Olympics and Paralympics.

The historic concept of North and South Korea's capitals jointly hosting the Games appeared to have stalled recently but new life seems to have been breathed into it after Moon met International Olympic Committee (IOC) President Thomas Bach during the United Nations General Assembly in New York City last month.

Bach had reportedly told Moon that the IOC would support the efforts from the two countries - still technically at war - to form a joint candidature.

The meeting seems to have reinvigorated Moon.

During the Opening Ceremony of the 100th annual Korean National Sports Festival in Seoul, Moon urged local citizens to "take the lead again" in the hosting of the "2032 Seoul-Pyongyang Olympics".

Moon claimed that the Olympics could again help the peace process between the two Koreas, which have floundered recently as the North's relationship with the United States has become more strained again.

"When inter-Korea dialogue was cut off, and the relationship was in a difficult situation, it was sports that opened the door to meetings and dialogue," Moon said.

Then, addressing a room of specially invited guests at another event to mark 13th World Korean Day, he urged Koreans living abroad to support the campaign.

"I request compatriots once again to work together for peace and prosperity on the Korean Peninsula," Moon said.

"I expect you to add strength to the bid for the hosting of the 2032 Seoul-Pyongyang joint Olympics."

A further boost for the North-South Korea bid came when Bach revealed after the IOC's Executive Board meeting in Lausanne last week that there are no plans to award the 2032 Games until 2021 at the earliest.

Until then, it appeared all the momentum was behind the Queensland bid with the Australians having held meetings with Bach at the IOC headquarters in Lausanne.

The Koreans will now have extra time to put together a proper bid, although the main obstacle will remain the volatile political situation in the region.

India and Indonesia have also submitted official letters of interest and Shanghai has been conducting a feasibility study.