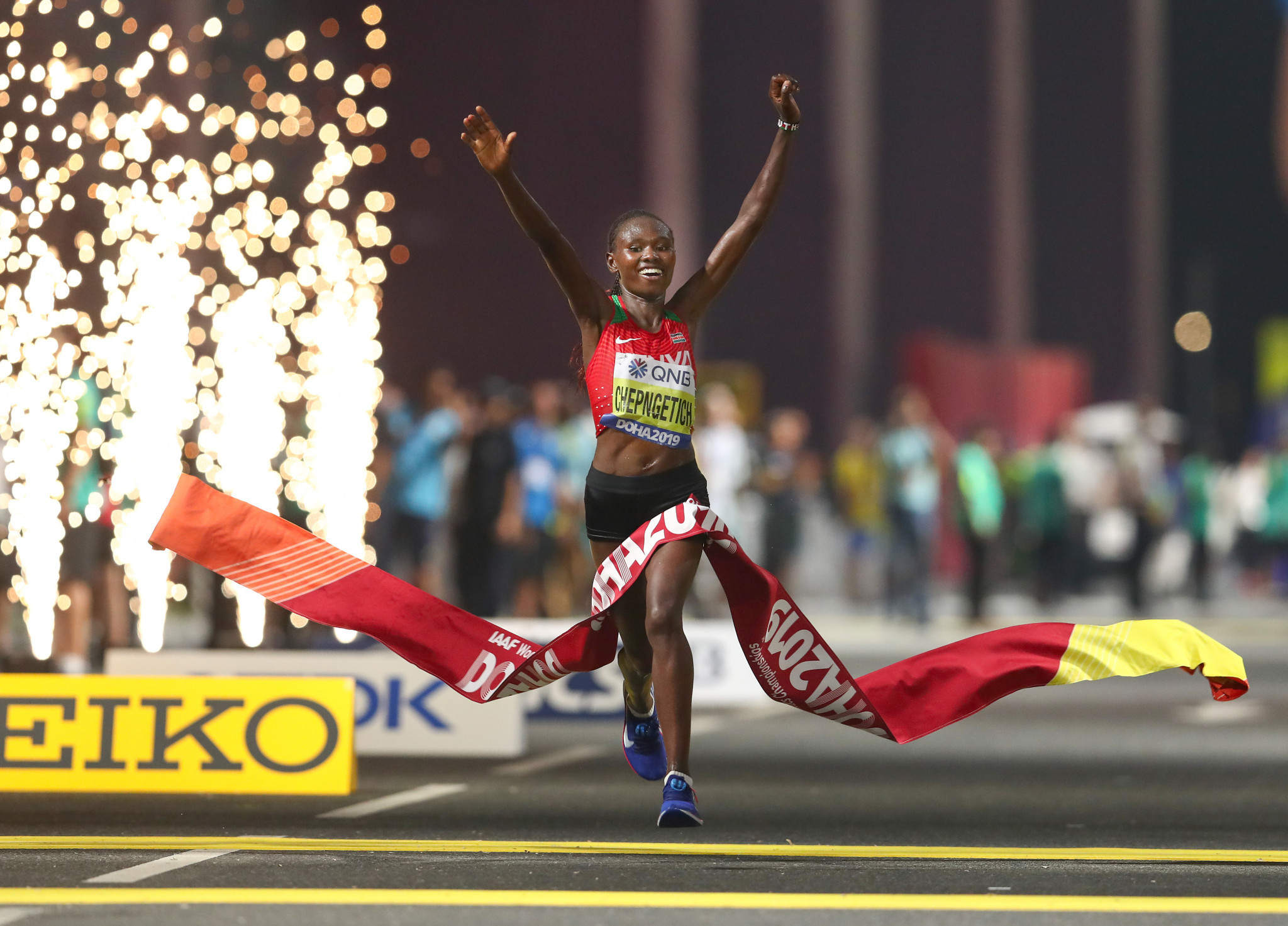 But the weather was the big story of the night, with temperatures between 30 and 32.7 degrees and humidity of 73 per cent, and 28 of the 68 starting athletes having to drop out.

On the floodlit Corniche, with good numbers of spectators lining the barriers, Chepngetich made an early effort to break away but was hauled back into the main group.

The 25-year-old became the third-fastest ever when winning the Dubai Marathon in January in 2 hours 17min 08sec, but the Doha challenge was about endurance rather than speed on seven laps of the six-kilometre circuit.

However, any thoughts she had misjudged her effort were dismissed, as she made a second, decisive break on the final lap, clocking 2:32:43 for gold - the slowest winning time in the 36-year history of these World Championships as she crossed the line at 2.33am in the morning.

At the age of 39, Kenya's 2011 and 2013 world champion and 2017 silver medalist, Edna Kiplagat, missed out on another medal by one agonising place, having tracked the lead for the bulk of the race.

Her time in a race where the top-10 finishers qualified for next year's Olympic Games in Tokyo was 2:35:36.

"It was a tough race but I knew what to expect," Chepngetich said.

"It was not bad for me - I trained for this weather, running in the afternoon when the sun was high.

"I am feeling good - I am very happy and I thank God for my win."

But that was not the case for over a third of the starting field, as runners sank down onto the kerb and accepted assistance before being ferried from the course.

Volha Mazuronak of Belarus, the European champion who survived a massive nosebleed to win in Berlin, hung onto fifth place after a long solo run, clocking 2:36:21.

But she was critical of the race location and timing.

"The humidity kills you," she said.

"There is nothing to breathe - I thought I wouldn't finish, it's disrespect towards the athletes.

"A bunch of high-ranked officials gathered and decided that it would take [the Championships] here but they are sitting in the cool and are probably sleeping right now."

The 41-year-old Roberta Groner of the United States claimed sixth in 2:38:44, one place ahead of Japan's Mizuki Tanimoto.

But perhaps the biggest surprise was that all three Ethiopian runners dropped out before the race got past halfway.

Ruti Aga, who has run 2:20:40 this year, Roza Dereje and Shure Demise found the conditions too tough.

Israel's sole entrant, 30-year-old Lonah Salpeter, winner of the European 10,000 metres title in Berlin last summer, ran bravely in fifth place for much of the race, only to see the field accelerate away.