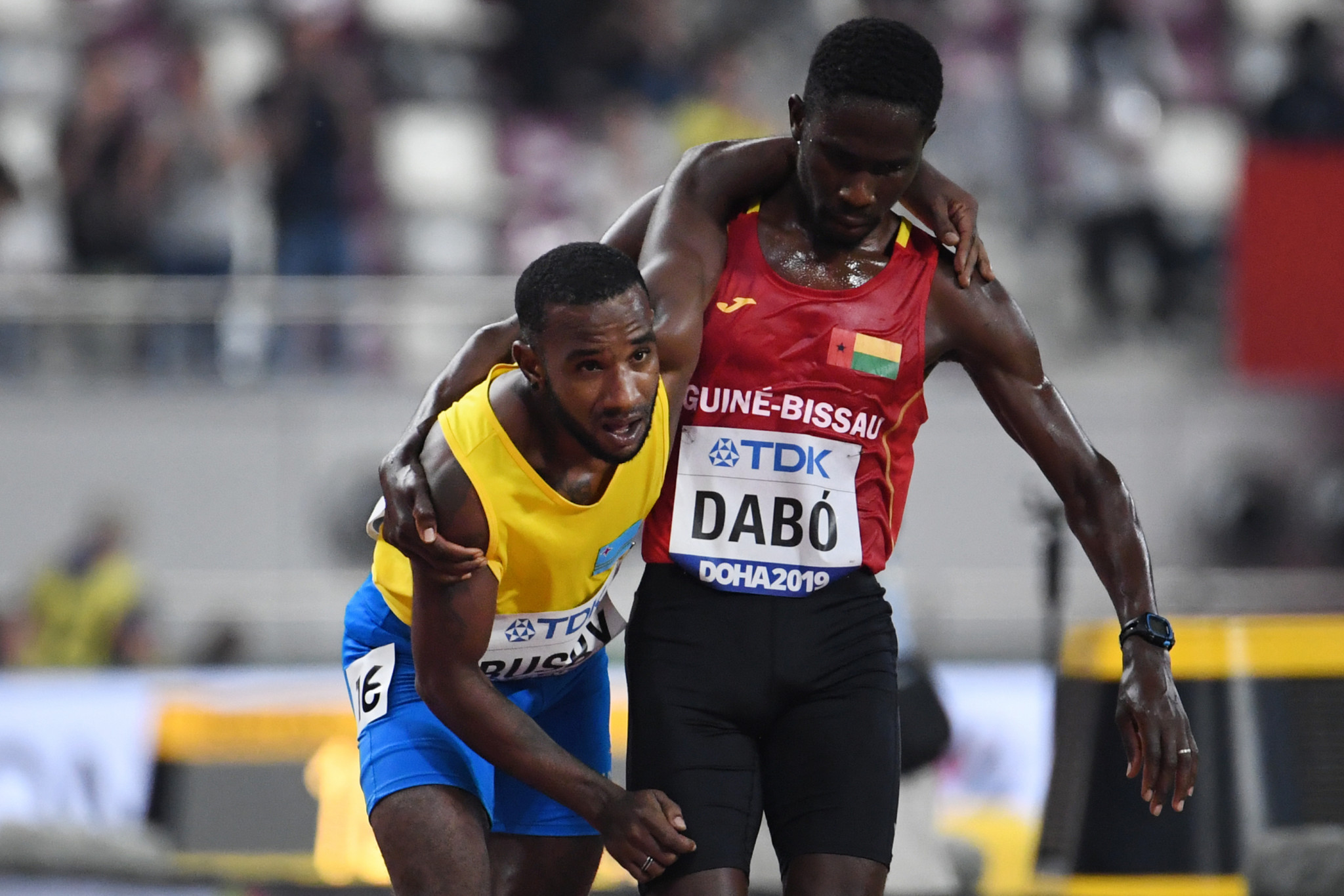 With all three of the big names in the men’s 400 metres hurdles winning their opening heats, the main focus on the opening day of the International Association of Athletics Federations (IAAF) World Championships here fell upon the opening heat of the men’s 5,000m, which saw Guinea-Bissau’s Braima Suncar Dabo stop running to assist a stricken opponent, 33-year-old Jonathan Busby of Aruba, in finishing.

The latter, twice-lapped, struggled badly as he entered the back straight for the final time, despite the fact that air conditioning had drastically lowered the temperature within the arena.

When Dabo, who had also been twice-lapped,  reached him, he stopped running and helped his opponent to his feet before supporting him around the final 200m in an affecting scenario that brought to mind other selfless acts on the track down the years.

The clearest parallel was when Britain’s Derek Redmond was helped home by his father Jim over the final part of his 400m semi-final at the 1992 Olympics in Barcelona after he had stuttered to an agonised halt in the back straight with a hamstring injury.

But the incident also recalled to mind the way in which two women taking part in another 5,000m heat, at the 2016 Olympic Games in Rio de Janeiro, made headlines around the world in similar circumstances.

The American soon got up and instead of running helped Hamblin before faltering on a clearly injured foot.

D’Agostino later fell down again and so Hamblin helped her up and the two began to run the race together before embracing at the finish line.

"My main goal here was to represent my country and improve my personal best," said the 26-year-old Dabo, who studies and trains in Portugal.

"When I realised I could not achieve my goal it made no sense to me to overtake him.

"We could both finish the race and represent our respective countries.

"I did not pay attention to the reaction from the crowd.

"I just focused on helping him cross the finish line."

Despite his actions, Dabo, who had also been lapped, still finished with a personal best of 18min 10.87sec in a race won in ominously easy fashion by Ethiopia’s 19-year-old world indoor silver medallist Selemon Barega in 13:24.69.

Barega’s contemporary, Norway’s European champion Jakob Ingebrigtsen, punched the air in satisfaction after coming through to take one of the five automatic qualifying places for the final.

The European 1500 and 5,000m champion’s satisfaction was short-lived as he was disqualified for stepping onto the infield earlier in the race, but he was reinstated on appeal.

He thus joins his elder brothers, Henrik and Jakob, who both preceded him European 1500m champion and who both followed him in qualifying from heat two.

Despite his long lay-off from hurdling, home athlete Abderrahman Samba - whose 2018 time of 46.98sec is now only the equal third fastest time ever - finished as fastest qualifier in the 400m hurdles in 49.08.

Norway’s defending champion Karsten Warholm, winner of this season’s IAAF Diamond League title in 46.92, the fastest ever run behind the world record of 46.78 set by Kevin Young of the United States in winning the 1992 Olympic title, was third fastest on the night, winning his opening heat in 49.27.

Defending triple jump champion Christian Taylor required one effort to qualify for the final on Sunday (September 29) with an effort of 16.99 metres that was third furthest on the night behind the 17.38m of Portugal’s Pedro Pichardo and the 17.17m reached by Burundi’s Hugues Zango.