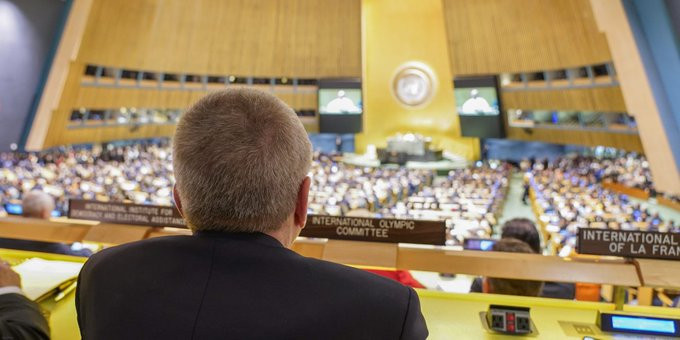 Moon and Bach met to discuss the possible South and North Korean candidacy for the 2032 Games on the sidelines of the United Nations General Assembly in New York City.

According to South Korean media, Bach told Moon that the IOC would support the efforts from the two countries - still technically at war - to form a joint candidature.

"We hope that the peace that started in Pyeongchang last year will continue to the 2032 joint inter-Korean Olympics," Moon said, according to the Korea Herald.

"I ask you and the IOC to help realise [the goal]."

Enthusiasm for South and North Korea bidding to co-host the Games has died down in recent months but Moon will be hopeful the meeting with Bach reinvigorates the joint bid plans.

Issues within the Korean Sport & Olympic Committee - which the South Korean Government has suggested be broken up as part of a radical overhaul of sports governance aimed at eradicating corruption - have intensified claims the bid may not materialise.

The two nations are pressing ahead with a joint bid for the 2023 FIFA Women's World Cup, however, and remain in the race to land the 2032 Olympics and Paralympics.

Australia has emerged as the clear favourite to be awarded the 2032 Games after a delegation from Queensland met with the IOC earlier this month.

Bach was full of praise for the proposal put forward by Queensland, which is set to launch a formal bid following the conclusion of a study looking into the possible venues, transport infrastructure, required funding and where it would come from.

The IOC President said the organisation "warmly welcomed" a potential joint Korean bid when he met with officials from the North and South in February.

Reforms passed to the bidding process by the IOC have also been perceived as a boost to the Korean proposal as the Olympic Charter requirement that a single city be named to host the Games was relaxed.

The changes allow "multiple cities, regions and/or countries" to be awarded the Olympic and Paralympic Games.