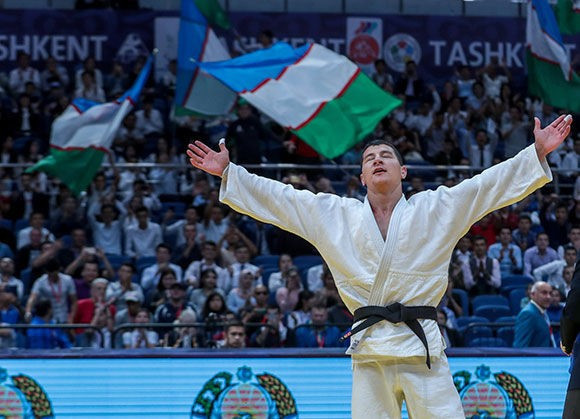 The Para-competition was held alongside the International Judo Federation (IJF) Grand Prix in the Uzbek capital following a deal struck between the two governing bodies.

Uchkun Kuranbaev was among the home winners at Humo Arena, defeating Namig Abasli of Azerbaijan with an osae-komi waza in the men's under-66 kilograms final.

In the women's under-57kg gold medal bout the two countries met again with the same result, as Uzbekistan's Parvina Samandarova forced Sevda Valiyeva to tap out.

Nafisa Sheripboeva then beat another Azerbaijan opponent in the women's under-63kg final, coming out on top after overpowering Khanim Huseynova.

"I am proud that the collaboration between IBSA and IJF is becoming stronger," said IBSA sports director Janos Tardos.

"It is not a coincidence that the two Grand Prix this year are combined with the IJF World Judo Tour.

"The IBSA staff is quite small and thanks to the collaboration we have a lot more resources.

"Another benefit is that the staff of the local federation already knows what to do.

"At previous tournaments, we sometimes had to work with staff that was untrained for the event.

"Now, the staff already had the experience of the IJF Grand Prix."

Iran were the only other country to win more than one gold in Tashkent as they took home a pair of titles.

In the women's under-52kg, Ukraine's Inna Cherniak performed a strong left koshi guruma, followed up by an osae-komi, to beat Canada's Priscilla Gagne to gold.