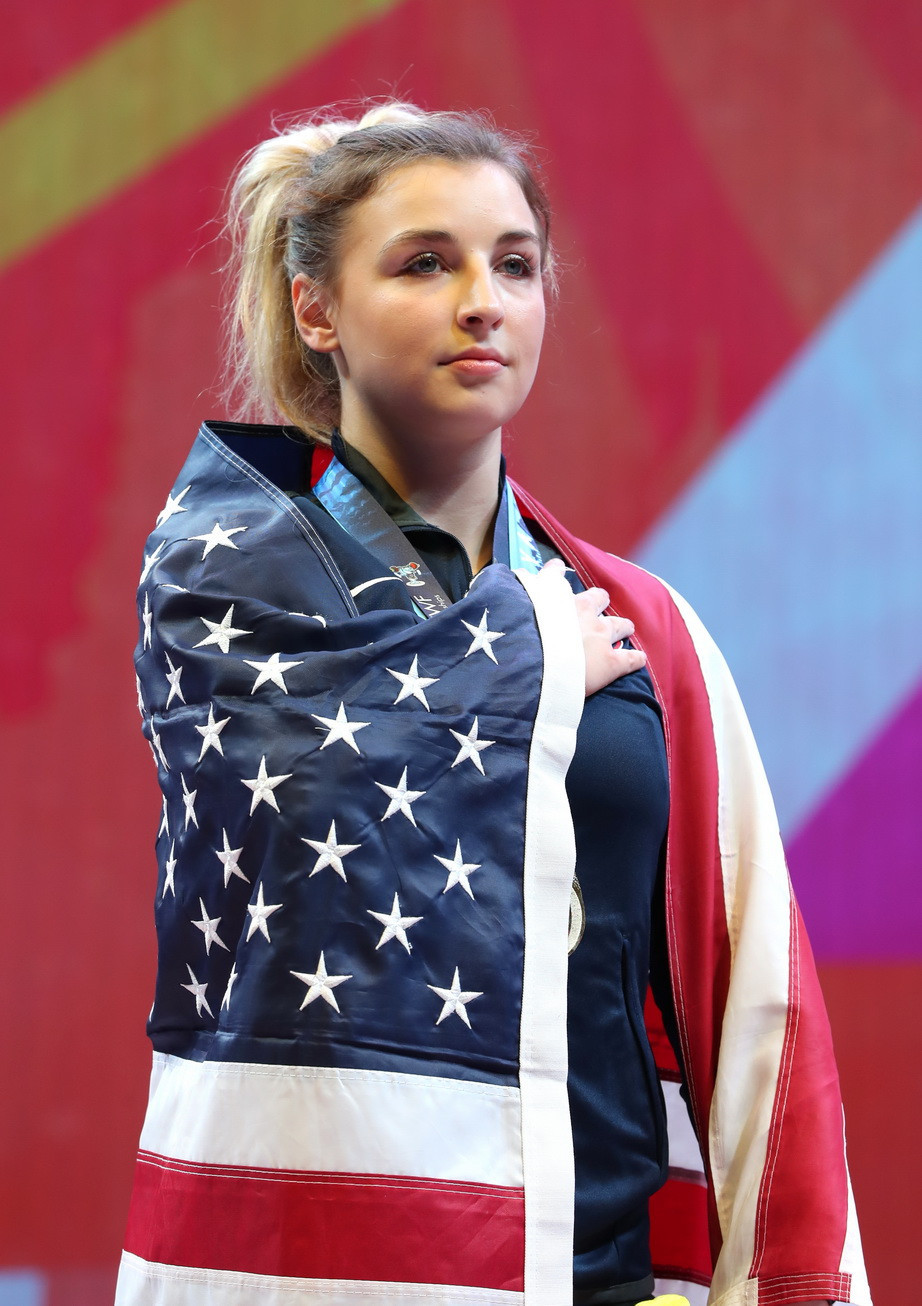 The 20-year-old finished with a total of 248kg after managing a junior world record-breaking lift of 112kg in the snatch – bettering the previous mark of 111kg set by Egypt's Sara Ahmed at last year's IWF World Championships in Ashgabat – and 136kg in the clean and jerk.

She is the youngest American woman to become a world champion in weightlifting.

It could have been even better for Nye, the reigning junior world champion, as she failed at 141kg with her final clean and jerk attempt in an effort to break the total junior world record of 252kg, also set by Ahmed in Ashgabat.

Rogers was the overall runner-up with 240kg, having finished third in the snatch with 106kg and second in the clean and jerk with 134kg.

No two American women have previously stood together atop a medal stand at an IWF World Championships.

It has also been three decades since two American women last stood together on a stand, with Karyn Marshall and Carol Cady having taken home the the women's over-82.5kg silver and bronze medals, respectively, in 1989.

Rounding off the podium was North Korea's Kim Hyo Sim, who ended on 230kg after coming second in the snatch with 110kg and, after suffering with a leg injury, sixth in the clean and jerk with 120kg.

It is Britain's first medal at an IWF World Championships since Myrtle Augee claimed snatch silver and clean and jerk and total bronze in the women's over-83kg category at the 1994 edition in Istanbul.

Godley failed with her last attempt at 131kg, which would have been enough to take her above Kim into third place in the total on 231kg.

Nine medals were split between six lifters in the men’s 89kg event, with Armenia’s Hakob Mkrtchyan ultimately prevailing in the total with 375kg.

In a highly-competitive category, the 22-year-old finished fourth in the snatch with 167kg and second in the clean and jerk with 208kg.

Iran’s Ali Miri was the total silver medallist with 374kg, having come fifth in the snatch with 167kg and third in the clean and jerk with 207kg.

Completing the top three was Georgia’s Revaz Davitadze with 371kg, after he won the snatch with 172kg and ranked eighth in the clean and jerk with 199kg.

Belarus' Aliaksandr Bersanau was the snatch silver medallist with 169kg.

He finished level with Colombia’s Keydomar Giovanni Vallenilla Sanchez, who broke the junior world record of 168kg set by Davitadze at Ashgabat 2018.

B session winner Toshiki Yamamoto of Japan was the clean and jerk gold medallist with 208kg, beating Mkrtchyan by virtue of the fact that he registered the lift first.

Medals will be awarded in the men's 96kg and women's 76kg categories.