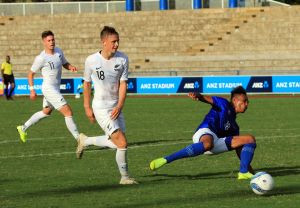 Favourites New Zealand began their campaign to secure a spot in the Olympic football tournament at Tokyo 2020 with a 6-1 thrashing of Samoa at the Oceania qualifier in Fiji.

Logan Rogerson, Myer Bevan and substitute Ollie Whyte also got on the scoresheet for New Zealand, who are looking for a fourth-straight Oceania Football Confederation qualifier title.

Michael Tumua had briefly reduced the deficit for Samoa but it mattered little as their opponents cruised to an easy win.

Match Day 1 of the OFC Men's Olympic Qualifier 2019 is complete and Solomon Islands are top of Group A table following the opening encounters in Suva. #OFCOQM pic.twitter.com/pXVdGNkDax

"We don’t expect to have it all our way when we come to the Islands anymore, and you only need to look back through the previous tournaments, the under-17s and under-20s and the last time we came with the young under-23s.

"Performance-wise all the other nations have improved hugely and the results are a lot closer than they ever have been," said New Zealand coach Des Buckingham.

"Des [coach Desmond Edward] has set Samoa up very well, they were extremely well organised, well coached and they have some good players but we got the result, that was important.

"But we have a few more gears to get through yet as this tournament progresses."

In the other match in the group, Solomon Islands hammered American Samoa 6-0 to move to the top of the table.

Only the winner of the tournament will qualify for Tokyo 2020.