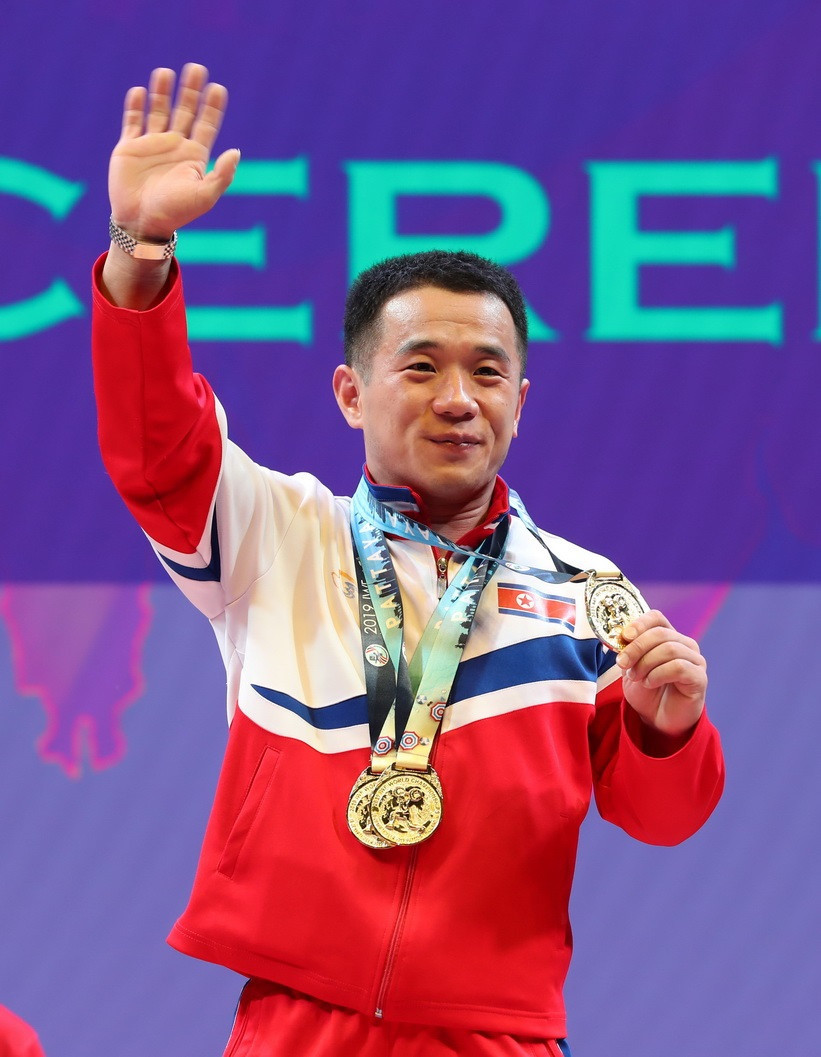 The London 2012 Olympic champion bettered his own clean and jerk mark of 162kg with success at 166kg, giving him a world record-breaking total of 294kg.

Om won the snatch with a lift of 128kg, giving him an 8kg lead going into the clean and jerk.

He is now a five-time overall world champion and has 12 gold medals to his name on the global stage.

Kazakhstan's Igor Son was overall silver medallist with 266kg, having finished third in the snatch with 120kg and fourth in the clean and jerk with 146kg.

Saudi Arabia's Mansour Abdulrahim M Al Saleem rounded off the podium with 265kg following his sixth-place finish in the snatch with 118kg and bronze medal in the clean and jerk with 147kg.

Vietnam's Nguyen Tran Anh Tuan was snatch silver medallist with 120kg, while Iran's Hafez Ghashghaei lifted 149kg in the clean and jerk to finish runner up.

In the women's 45kg event, European champion Şaziye Erdoğan of Turkey triumphed overall with 169kg after winning the snatch with 77kg and coming second in the clean and jerk on 92kg.

Cuba's Ludia M. Montero Ramos finished 2kg behind Erdoğan in the silver-medal position, having ranked second in the snatch with 76kg and fourth in the clean and jerk with 91kg.

Indonesia's Lisa Setiawati had to settle for third place overall with 165kg, despite winning the clean and jerk title with 95kg.

She could only manage a seventh-place finish in the snatch, lifting 70kg.

Vietnam had bronze medallists in both the snatch and clean and jerk.

Junior world champion Khong My Phuong posted 74kg in the snatch, while Asian champion Vuong Thi Huyen registered 91kg in the clean and jerk to edge out Montero Ramos into third place.

Today's action was preceded by an Opening Ceremony, which showcased the best of Thailand's rich culture.

Proceedings began with a video that took the audience on a journey across host city Pattaya and the surrounding region.

It was followed by a drum and wind instrument musical performance, before IWF President Tamás Aján and Thai Amateur Weightlifting Association (TAWA) counterpart Madam Boossaba Yodbangtoey addressed the audience alongside the Mayor of Pattaya, Sontaya Kunplome.

"This is a very special occasion," Aján said.

"We are very grateful and happy that TAWA has invited the weightlifting family for these World Championships.

"This is a very important event: 100 countries with more than 600 competitors from all five continents from the world are here.

"I thank TAWA and the Executive Board members who are here and we are ready to celebrate a fantastic competition."

The host country's flag was raised to the Thai national anthem.

The final act of the Opening Ceremony was a traditional Thai drum performance.