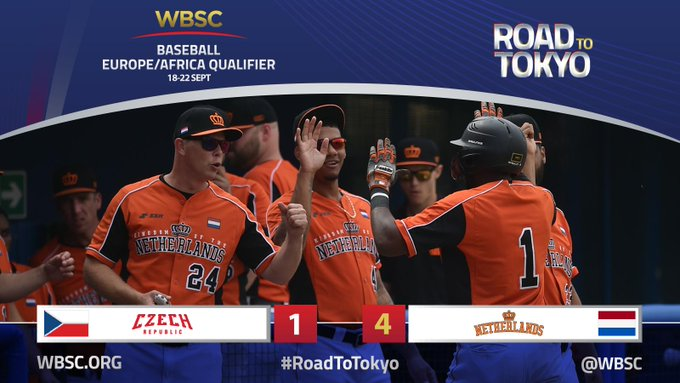 The Netherlands made a winning start to the Africa/Europe qualification event for the Tokyo 2020 Olympic Games by overcoming the Czech Republic in Parma.

The Dutch team are favourites to win the Olympic qualifier, following their victory at the European Baseball Championships last week in Germany.

Their form continued as the World Baseball Softball Confederation event began in Italy.

Czech Republic posed a dangerous challenge to The Netherlands, having inflicted their only defeat at the European Championships.

The Czech team triumphed 8-6 in the group stage of the competition.

But they were unable to repeat the feat at the Nino Cavalli Stadium in Parma, as The Netherlands earned a 4-1 victory.

Italy began their campaign in the same venue in the evening fixture.

The hosts faced South Africa, who won the African Championships in May.

With the match tied at 4-4, officials were forced to postpone play due to poor weather conditions.

Spain suffered a 3-0 loss to Israel at the Gianni Falchi venue in Bologna to complete the first day of fixtures.

The winner will join Japan in next year's Olympic baseball tournament, with the host nation qualifying automatically.

Two places are decided at the World Baseball Softball Confederation's Premier12 tournament in Tokyo in November.

The Americas qualifying event in Arizona next March will decide one qualifier.

Chinese Taipei will host the final qualifier next year, with a single place on offer.