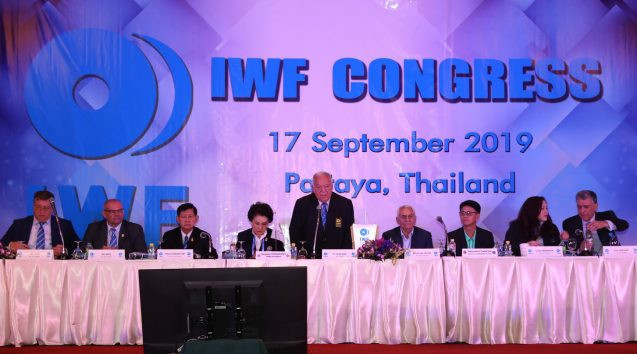 The International Weightlifting Federation (IWF) Anti-Doping Commission noted a decline in the number of ineligible athletes at the sport’s events as the world governing body held its Congress here today.

The Commission, chaired by Patrick Schamasch, reported that more than 1,100 in-competition tests have been conducted this year on athletes from 89 countries, using a number of different world-class sample collection authorities.

It also encouraged all 100 member federations present to promote the #iLiftClean e-learning platform.

International Testing Agency (ITA) director general Ben Cohen also reported that more than 550 out-of-competition tests have been conducted this year by the organisation, on athletes from more than 50 nations.

Cohen also revealed that the World Anti-Doping Agency (WADA) had expressed its satisfaction with the IWF’s anti-doping programme following its audit over the summer.

In March, the IWF was celebrating when the International Olympic Committee (IOC) lifted its "conditional inclusion" status for weightlifting on the Olympic Games programme.

The sport had been effectively put on probation beyond Tokyo 2020 because of its poor record on doping violations, 55 of which were revealed by tests carried out by the IOC on stored samples from Beijing 2008 and London 2012.

The decision to welcome weightlifting back on a permanent basis was made by the IOC’s Executive Board after the IWF toughened its stance against doping with a number of radical changes, most notably the adoption of a new Olympic qualifying system that rewarded "clean" nations.

It was subject to the IWF putting its anti-doping programme in the hands of the ITA, a process that began last November and ended in May when the second agreement was signed at SportAccord, the world's premier sport and business summit, in the Gold Coast in Australia.

The IWF claims its commitment to anti-doping is further reinforced by the fact that 40 per cent of its total revenue is spent on it.

This was stated as part of a presentation of a report on the 2019 IWF budget, during which financial director Alain Siegrist explained that revenues were higher than originally foreseen.

The budget for next year is said to be "very positive" due to the impact of Tokyo 2020.

The Congress also saw IWF director general Attila Adamfi outline the importance of good governance being at the heart of all the body’s operations.

Adamfi expressed the IWF’s pledge to improving its score in the next Association of Summer Olympic International Federations (ASOIF) governance review.

Furthermore, he reported on the external evaluation that has been conducted into the continental federations' governance, using the same principles applied by ASOIF.

The Congress, which included updates from each of the IWF Committees and Commissions, followed a two-day meeting of the Executive Board

The IWF World Championships are due to take place here in the Thai city of Pattaya from tomorrow through to September 27.

"It is always a great honour to host the IWF Congress and welcome our colleagues from around the world," IWF President Tamás Aján said.

"It is during our Congress and World Championships that you can get a sense of what a global and widely-loved sport, weightlifting truly is.

"We had a very full agenda today but it was greatly encouraging to hear of all the fantastic work that our Committees and Commissions are doing across all areas of our sport.

"The last few years have seen significant enhancements across many areas of weightlifting, particularly in the strengthening of our anti-doping programme, which has been recognised by WADA and the IOC.

"But we know there is always room for improvement.

"We have many planned reforms and innovations that we heard about today that will further improve our sport and many excellent events to look forward to.

"Working together with all our members we have a very exciting future ahead."