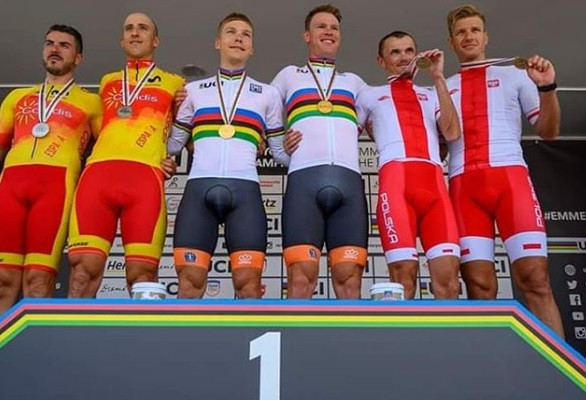 Tristan Bangma and Patrick Bos of the Netherlands clinched the men's B title, as road races began at the International Cycling Union Para-cycling Road World Championships in Emmen, The Netherlands.

The Dutch duo, who specialise in track events, secured gold on home soil in the tandem race, crossing the line in 2 hours 16min 14sec.

All three teams completed the 103.6 kilometres course in the same time.

New Zealand's Emma Foy and Hannah van Kempen triumphed in the women's B race in a time of 2:07:39.

Katie-George Dunlevy and Eve McCrystal of Ireland recorded the same time to seal silver, and Justyna Kirla and Aleksandra Teclaw added another medal to Poland's tally by finishing third.

Wang Xiaomei of China upset the rest of the field to claim gold in the women's C3.

Wang took the tape in 1:36:47 to edge out Keiko Sugiura of Japan and American Clara Brown, who ended with silver and bronze, respectively.

They have had a fantastic Championships winning gold in the TT earlier in the week 🌈👏@avolon_aero pic.twitter.com/ClSc7zVKf8

The 51.8km race had been billed as a showdown between Australia's Paige Greco and Germany's Denise Schindler, but neither were able to challenge for the medals.

In the women's C2, Germany's Maike Hausberger took gold in 1:36:52, narrowly in front of silver medallist Daniela Florez of Colombia.

The bronze medal went to Zeng Sini of China.