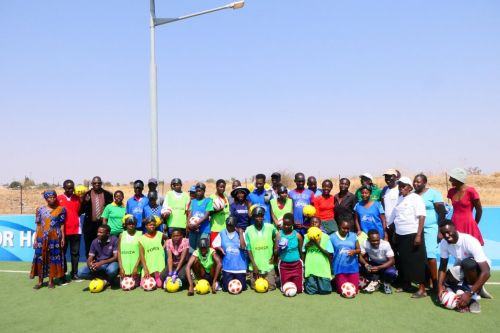 The five-day clinic took place in the Bulawayo province, with the participants, comprising 16 coaches and 21 players, learning about the rules, techniques and tactics of the sport.

Each player received a ball and blindfold to allow them to continue practising, and introduce the game to visually impaired and blind people in their province.

Coaches were also provided with a coaching certificate upon successfully passing the course.

"The clinic was in a class of its own, where the impossible became possible," said Elizabeth Chingwena, a blind football coach representing Nyamuzuwe High School.

"I plan to coach all learners with visual impairments in my school, even adults in the community, have friendly matches with other schools that also play the game and invite other teachers in the school, and especially PE & sports teachers, to coach blind football with me."

ZNPC then visited the University of Zimbabwe, where they held a blind football workshop last year.

They organised a training session for the University's blind football team.

ZPC are now planning a two-day blind football training camp at Mahuwe Primary and High School in Mashonaland Central, which has a resource unit with 15 blind and visually impaired learners.

"Following the successful coaching clinic, we will now look ahead to providing refresher courses and expose coaches and players to provincial competitions before going to international competitions," said ZNPC President Michael Bulagango.