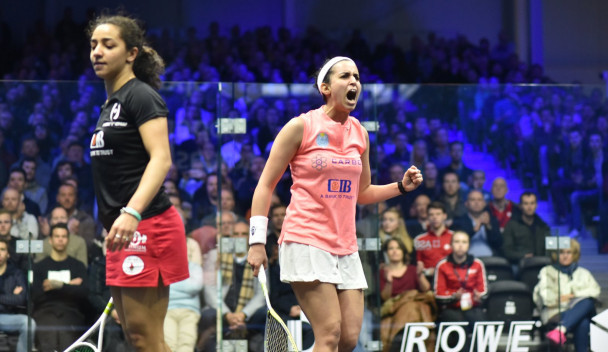 But the shine was taken off her day when husband Ali Farag, the world champion and number one, lost his final against second seed and defending champion Mohamed Elshorbagy on the showcase court at the top of the Peninsula Shanghai.

Defending champion El Welily, who won the world title in 2017, was playing in her 50th PSA final, and after battling back to level at 2-2 she looked on the brink of making it a victorious one.

But her 26-year-old opponent dug deep to take the deciding set and claim victory in 70 minutes.

"It didn’t seem like it was ending, I can’t believe I’m the winner," El Tayeb said.

"Throughout the whole match I was reminding myself that it’s good to be in the final, even though in the fourth game I was leading and I started to see the finish line a bit and I had to remind myself that I was playing Raneem and that the finish line might not happen.

"When she won the fourth I was a bit defeated and then she started the fifth very well but Ali [Farag] told me to just dig in.

"It’s a dream start to the season and hopefully I can keep going."

"It’s the kind of matches I want to be in this season,” said 28-year-old Elshorbagy afterwards.

“I want to be playing finals, especially with him.

“I want to beat him this season, I want to get his world number one spot and I’m going to be hard to stop this season.

"I told him after the match that I hope that if I’m going to get it then he’s not going to give it to me easy, because I like the challenge and I didn’t give it to him easy.

"This is only our first battle this season, there is way more to go I’m sure."