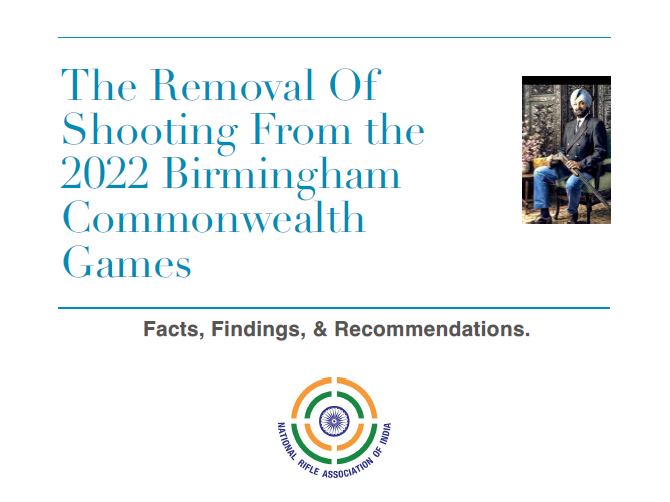 National Rifle Association of India President Raninder Singh has claimed the International Shooting Sport Federation (ISSF) have offered financial assistance to have the sport included at Birmingham 2022 and suggested its absence risks alienating the subcontinent.

Singh made the claims in a 184-page report entitled: "The removal of shooting from the Birmingham 2022 Commonwealth Games – facts, findings and recommendations."

The report was initially sent to India's Sports Minister Kiren Rijiju, who then wrote to Britain's Secretary of State for Digital, Culture, Media and Sport Nicky Morgan urging her to intervene in the row.

India has traditionally been strong in the sport, winning 16 medals, including seven golds, at Gold Coast 2018.

Shooting was not included on the Birmingham 2022 programme, prompting the Indian Olympic Association (IOA) to threaten to boycott the event.

Birmingham 2022 has claimed it did not have the facilities to accommodate shooting and was not prepared to host it at the Bisley National Shooting Centre, more than 130 miles away.

Singh dismissed concerns over the potential cost of shooting’s inclusion on the Games programme and the distance to Bisley, the range which has been proposed by supporters for any potential competition.

He claimed the ISSF have pledged financial support to any competition, which he believes would ease any potential burden on organisers.

"Through this and in the presence of the President Vladimir Lisin and the secretary general Alexander Ratner, the ISSF very generously offered to completely finance at an estimated £780,000 ($960,000/€870,000), the refurbishment of all equipment necessary to bring Bisley to a finely tuned mark for the conduct of the shooting events,” Singh wrote.

"No further investment is warranted on the range as all the infrastructure required to conduct the Games is existent since Manchester 2002 Commonwealth Games were conducted on this very range.

"The second issue stated, that since Bisley is at a distance of 130 kilometres from Birmingham, such a distance necessitates the requirements of a satellite village to be created to house the requisite athletes and official nearby Bisley itself.

"This is an additional cost to the Organising Committee that it may not be able to burden.

"When one observes, that the Organising Committee shall be transporting cycling athletes to the London Velodrome on a daily basis, one is struck by the fact that Bisley is much closer to Birmingham than London.

"Strangely the same standard and yardstick of finding a requirement for a satellite village for the cycling athletes and official does not find mention, yet for shooting it does?

"Shooting as a sport is quite adept to two hours there and back.”

Singh claimed the Indian subcontinent would be negatively impacted from shooting’s absence from Birmingham 2022.

He noted that Bangladesh’s two gold medals at the Commonwealth Games have come in shooting, while the sport was responsible for one of Sri Lanka’s four golds.

Singh included letters in the report highlighting the support of several British Government officials for having shooting included on the programme.

He claimed Indian Prime Minister Narendra Modi would raise the issue with British counterpart Boris Johnson, as he reportedly had done with Johnson’s predecessor Theresa May.

Singh questioned whether alienating the Indian subcontinent would be a wise decision for Britain as the Government prepare to leave the European Union.

"The analysis in this paper clearly points out to a disadvantage targeted towards the nations in the Indian subcontinent,” Singh wrote.

“It is pertinent to note that India and its neighbours contain a large population size that aspires to not only compete but also to promote the Commonwealth Games.

"Finally, as he has most graciously done in the past, we once again look to our Prime Minister Shri. Narendra Modi Ji to take up the matter bilaterally with his counterpart Mr Boris Johnson, Prime Minister of the UK, at his earliest convenience.

"The timing for our Governments intervention cannot be better as the new Government that has just taken office in the UK is surprisingly stacked with cabinet ministers who are and remain supportive of our sports re-inclusion for 2022.

“Besides, the host nation’s top current political agenda is driven by the issue of Brexit, given that this shall leave the host nation rather aloof post such an exit completion, would this most hospitable host nation choose to alienate 1.45 billion Commonwealth members as well?”

The IOA carried out its threat to boycott the CGF General Assembly in Rwanda this week.

It is due to discuss whether to boycott Birmingham 2022 at a meeting later this month, but CGF President Dame Louise Martin and chief executive David Grevemberg hope to hold talks with them in November.

Grevemberg claimed earlier this week that some of the blame for shooting being dropped from the programme for only the second time in 56 years was down to the ISSF.

He claimed that, unlike other world governing bodies, the ISSF did little to promote shooting in the Commonwealth.

"The ISSF needs to take some responsibility in terms of development of shooting across the Commonwealth," Grevemberg said.

"The ISSF needs to engage with us.

"We are committed to engaging shooting, as well as India."