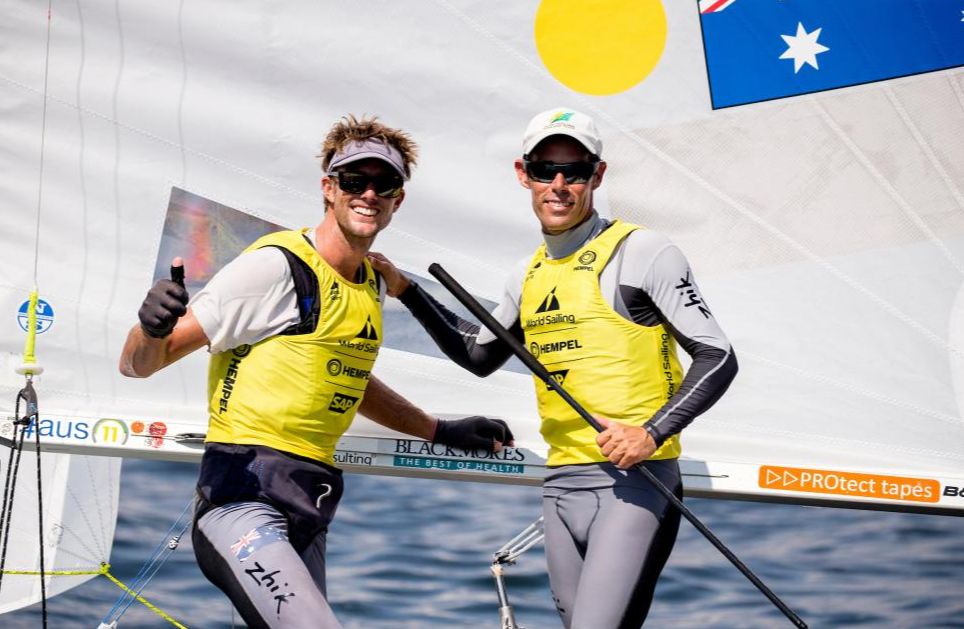 Australia's Mat Belcher and Will Ryan completed a superb hat-trick of consecutive wins on the Tokyo 2020 course as they won men's 470 gold at the Sailing World Cup in Enoshima.

The duo won the 470 World Championship title in Olympic waters on August 9 and then wrapped up the Tokyo 2020 test event title on August 22.

Their latest success, at the opening Sailing World Cup leg of the season, proves that they will take some stopping at next year's Games as they are clearly adept in the Enoshima conditions.

Belcher and Ryan were 16 points in front of Spain's Jordi Xammar and Nicolas Rodriguez going into today's medal race and stayed out of trouble with a fifth-place finish to confirm gold.

It came as light winds frustrated on the final day of the World Cup, causing the cancellation of the medal races in the finn, laser and laser radial.

The women's 470 class did take to the water with Spain's Silvia Mas and Patricia Cantero coming from behind to clinch gold.

They started the day three points behind Australians Nia Jerwood and Monique de Vries but their eighth-place in the medal race, compared to their rivals' 12th, was enough to pip them to gold by a single point.

Mas and Cantero left it late to pounce as they made their move during the final downwind.

"It was a great experience and today was a nice way to finish off five weeks in Japan," said Belcher, who won Olympic gold at London 2012 with Malcolm Page.

"We've been ticking off a few things to prepare the best we can on the Olympic waters.

"It took us a while to get everything organised.

"Obviously we got into good shape so we have to thank our coach and support staff but it gives us a bit of confidence for next year.

"There's a lot of work to do and I have no doubt all the teams will train extremely hard through to next year."

Cantero added: "I was nervous on the last downwind.

"And then on the run to the finish I was calm because I knew it was done."

Xammar and Rodriguez took silver in the men's 470 with bronze going to Japan's Kazuto Doi and Naoya Kimura on home water.

Jerwood and De Vries had to settle for silver in the women's 470 as bronze was claimed by Frederike Loewe and Anna Markfort of Germany.

The overnight leaders were confirmed as champions in the three classes where racing was not possible, although in the laser and finn the winners had already been crowned with a race to spare.

Plasschaert also won the Tokyo 2020 test event so now has a pair of victories on the Olympic course.

Nicholas Heiner of The Netherlands won the finn by 25 points from Croatia's Josip Olujic, as bronze went to Ioannis Mitakis of Greece.

The next World Cup will take place in Miami in January.