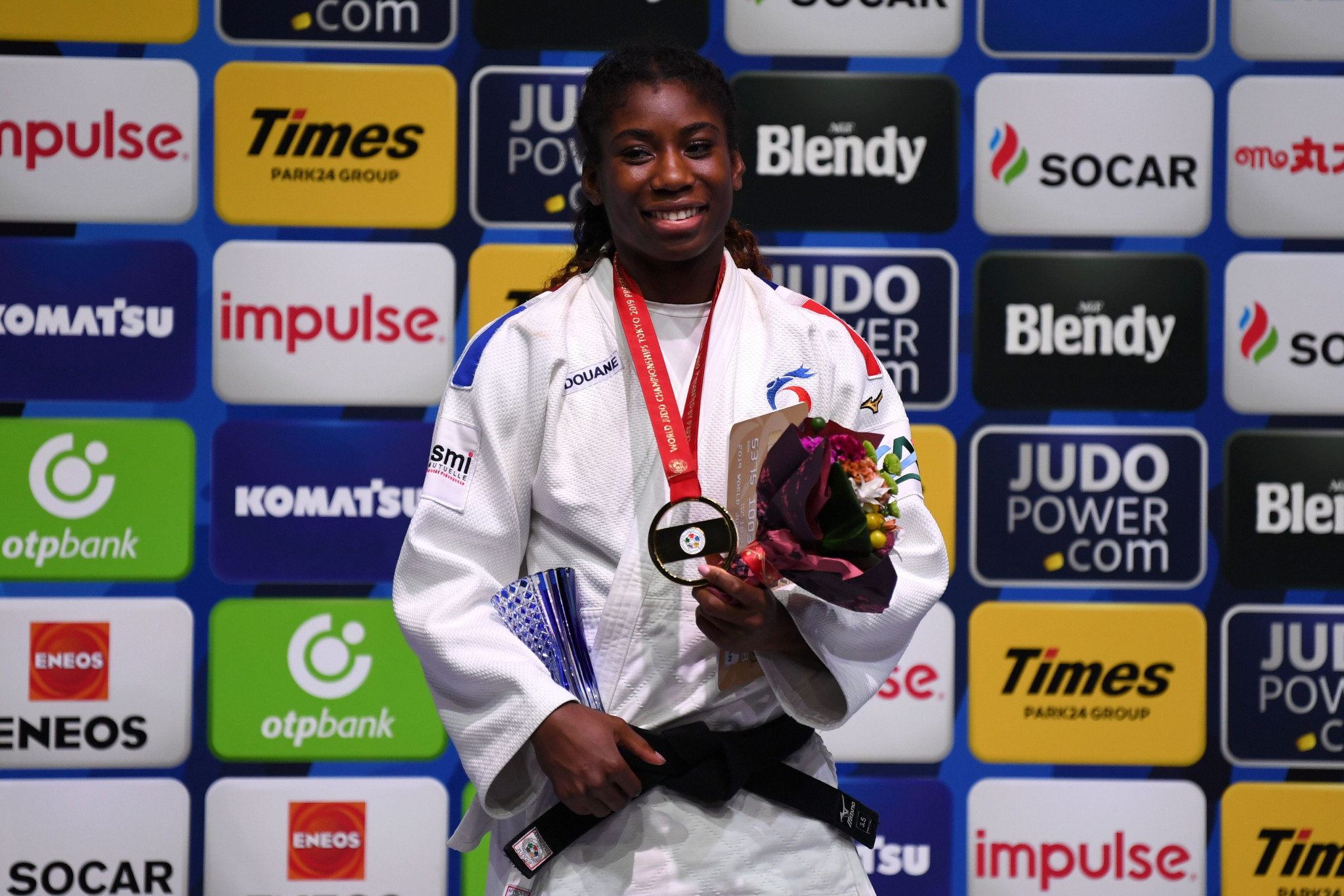 A day of upsets and shocks at the International Judo Federation (IJF) World Championships ended in gold medals for Marie-Ève Gahié in the women's under-70 kilogram category and Noël van 't End in the men's under-90kg.

French second seed Gahié went one better than her performance at the 2018 Championships, defeating surprise finalist Barbara Timo of Portugal, the world number 29, in the final in Tokyo.

Timo had earlier eliminated world champion, number one seed and prime Japanese medal candidate Chizuru Arai by a waza-ari score, before performing some outstanding defensive judo for the remaining three minutes of the fight.

However, she fell short in the final, tapping out when Gahié got her to ground and executed a perfect jūji-gatame arm-lock.

Gahié was visibly delighted with her victory at the Nippon Budokan, screaming in delight and giving her coach a huge hug as she left the tatami.

"I just want to say thank you, I am so happy, this is very beautiful," she said.

"It's an honour for me, Japan is the country of judo, it is a wonderful feeling.

"After losing last year, I tried to work more, to be focused from beginning to the end of every fight.

"Clarisse inspires me, she is like my big sister, she is an inspiration.

"She gave me the advice of staying focused and believing in myself - you can do it, she told me."

Bronze medals went to Gahié's compatriot and world number 11 Margaux Pinot, and also to Sally Conway of Britain, who added third place here to her podium finish at the Rio 2016 Olympics.

Van 't End broke Japanese hearts as he defeated Shoichiro Mukai in an enthralling final, throwing the home hopeful for a waza-iri with 24 seconds remaining.

The Dutch world number 10 had never won a major IJF Championship medal, but took his opportunity after none of the top four seeds made it to the final session in the evening.

World champion and number one seed Nikoloz Sherazadishvili of Spain lost his second match against France's Axel Clerget by a waza-ari score, while second-ranked Krisztian Toth of Hungary was beaten in the quarter-finals by world number 74 Marcus Nyman.

Sweden's Nyman, European champion in 2010, has twice retired from judo but made a dream run in Tokyo, going from one of 12 male judokas who had to fight in round one all the way to the final four, before being bested by Mukai.

Mukai, not considered one of the stars of the Japanese team, defeated third seed Ivan Felipe Silva Morales of Cuba with a textbook ko-uchi-gari for ippon in his quarter-final, but could not defeat van 't End in the final.

Van 't End needed medical time-outs to deal with finger injuries in both the semi and final, but managed to claim gold for The Netherlands in the same arena where judo great Anton Geesink won the first Olympic medal in the sport during the 1964 Games.

"I'm very happy to have this gold medal around my neck, and I'm excited for next year here at the Olympics - I'm going to try and get gold again," he said.

"I've been fighting really well, stepping up my game, and I have the medal to prove it.

"The history has been on my mind a few weeks, but today especially I had Geesink in my head the whole time, it was like he was there with me somehow, it gave me extra spirit."

On the injury time-outs, he said: "My fingers started bleeding, that happens in judo, you grip very hard."

Bronze went to Clerget for the second World Championships in succession, and to 2017 world champion Nemanja Majdov of Serbia.

The World Championships continue tomorrow with the men's under-100kg and women's under-78kg competitions, with insidethegames providing live blog coverage on all the action.