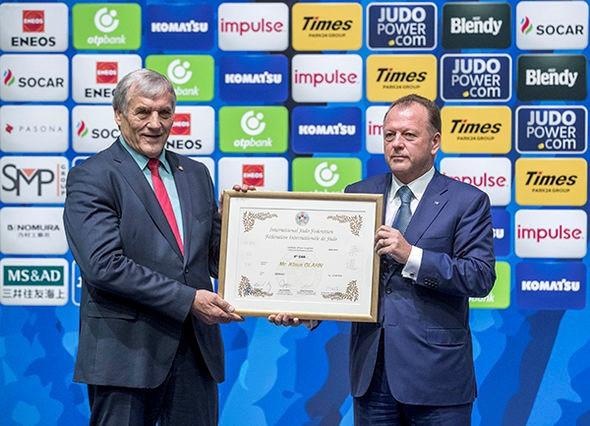 German judo legend Klaus Glahn has been awarded the ninth dan - the second highest ceremonial honour in the sport - in a ceremony at the International Judo Federation (IJF) World Championships.

IJF President Marius Vizer made the presentation to 77-year-old Gahn, prior to the finals session day two of the Championships at the Nippon Budokan in Tokyo.

Glahn competed at the Nippon Budokan in the first ever Olympic judo competition at the 1964 Games, taking bronze in the open open weight category representing the United Team of Germany.

Eight years later he won a silver medal for West Germany in the heavyweight category at Munich 1972, and won five World Championships medals between 1967 and 1973.

The ninth dan is a degree of black belt which can only be bestowed as a special honour by the Kōdōkan, the headquarters of the worldwide judo community.

It is second in the judo hierarchy to 10th dan, which has only been awarded to 15 people in the history of the sport.

Glahn was honoured before the finals of the women's under-52 kilograms category and the men's under-66kg division, won by Japanese judoka Uta Abe and Joshiro Maruyama respectively.