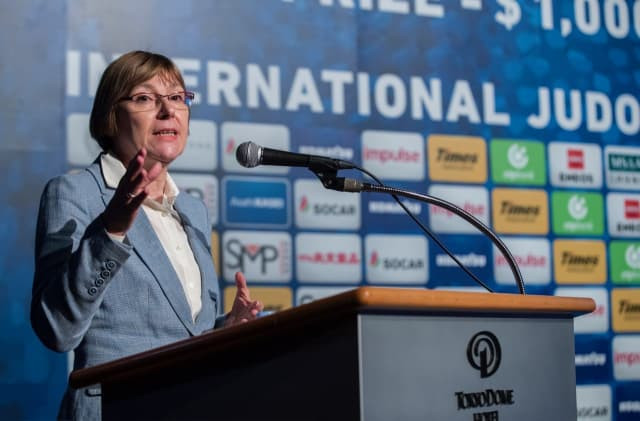 The treaty was signed by IJF President Marius Vizer at their Gender Equity Conference in Tokyo, ahead of the World Championships due to start tomorrow in Japan's capital city.

The treaty obliges signatories to allow women and girls to freely and safely participate in sport, and build careers within them as well as compete effectively.

IJF have already confirmed that there will be equality in the judo competition at next year's Olympic Games, where the same number of judoka and medals available to both genders.

At Rio 2016, there were 237 men and 153 women competing, while at these World Championships, 510 male judoka and 331 female athletes are scheduled to take part at the Nippon Budokan.

It  was acknowledged at the Conference that, while judo is approaching equality on the tatami, more needs to be done to represent women in other roles in the sport.

Croatia Judo Federation President Sanda Čorak, speaking at the Conference, revealed only 18 per cent of referees are female, along with 13 per cent of IJF Commission members.

Of the 170 National Federation Presidents, only 12 are female, while of the 23-person IJF Executive Committee, the only woman is competition manager Lisa Allan.

"I was elected judo president at the end of 2004, and when I came to conferences I observed a small number of women," Čorak said.

"I thought this would be changed, years passed, and nothing much really changed.

"To give you exact numbers, at that time there were only two women who were national judo presidents in Europe; today, we have three women out of 52 countries.

"If we are doing nothing, nothing is going to be changed.

"Gender equality is a human right, this is not only a women's issue, and it is among the bases of Olympism.

"It is also among the core principles of good governance."

The All Japan Judo Federation have initiated a number of policies ahead of the World Championships, including "Career Up Seminars" to inspire and motivate women to participate in judo, as well as giving mothers easier access to the Championships with a day care centre at the Nippon Budokan.

Idalys Ortiz, gold medallist at the London 2012 Olympics and top over-78 kilograms seed at these World Championships, gave her support for the new measures and claimed her success had come from a strong support for women's sport from her home nation of Cuba.

"In my 20 years practicing judo, I know that every woman has stories of their experience in the sport," the Cuban, also a gold medallist in the 2013 and 2014 World Championships, said.

"I started judo in a small gym about 160 kilometres from Havana, I was nine years old.

"My first coach explained to me what this sport meant; a lot of discipline, effort and training.

"My first international tournament, in 2006, I lost the first fight, but I have never lost a first fight since then.

"I have grown as a woman, an athlete, a judoka.

"Women's judo in Cuba has been full of human values, people in society understand we play this sport, which makes us feel more free, physically and spiritually.

"The women in Cuba have reached the top level in judo, first the level of the United States, then the rest of the world.

"That shows what can happen when women are supported.

"It does not depend on who has the most muscles, but on assuming that strength and freedom can be for anyone.

"Our coaches have realised that women can compete in combat sports while still being beautiful, also liking music, flowers, while feeling the love of our partner."